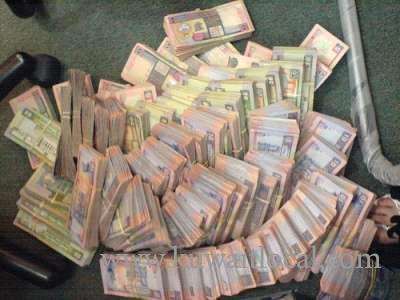 When a number of economic experts were asked for their opinion about the remittance tax, most of them rejected the idea, stressing the need for enhancing the economic environment of the country and achieving the necessary reform before applying such a tax.

Economic expert, former managing director of Environment Public Authority and former chairman of Board of Directors of Gulf Bank Ali Rasheed Al-Bader said he does not expect the enforcement of tax system in Kuwait to be a success.

He explained that levying the remittances of expatriates will lead to the emergence of a black market, which will reflect negatively on the economy of the state.

The revenues that will be obtained from imposing the remittance tax will not cover the technical and logistic expenses related to tax collection.

This will increase the burden on the public funds, as the expenses incurred in collecting the tax will be more than the total tax collected.

Eventually, a part of the public funds will be allocated for covering this expense. Al-Bader affirmed that levying the remittances of expatriates is not a suitable option, as it will add nothing to the state economy especially at present when the state has control over 80 percent of the economy. He said, “If sectors such as education, health, transportation and oil are privatized, the enforcement of taxes will be necessity which will be supported by everyone.

The only type of tax that can be imposed currently is the income tax but amount of collected tax will not be high”.

Meanwhile, economic expert Mohammad Ramadan indicated that levying the remittances of expatriates has not been decided yet. However, he insisted that such taxes especially remittance tax will have negative consequences on both expatriates and citizens, and it will result in the emergence of a black market as well as create major problems for the money exchange companies.

Ramadan predicted that the prices of all kinds of commodities and services will be increased. He highlighted that levying the remittances of expatriates will not work in favor of the vision to transform Kuwait into an international financial and commercial hub.

Ramadan urged the concerned authorities to cancel subsidies in order to deal with the crisis that resulted from fall in the oil prices.

Furthermore, economic expert Mohammad Al-Thamer stressed the importance of enforcing tax reforms as a way of enhancing state revenues in light of the increasing population due to which there is a need for creating job opportunities. He said the government will not be able to continue offering a prosperous standard of living for citizens if the situation continues the same, stressing the need to create ways to enhance non-oil revenues.

Al-Thamer pointed out the fact that expenses incurred in offering subsidies is almost KD 6 billion, insisting that the state needs a new way of administration to cope with the low oil prices and the international economic changes.

He stressed that taxes should not target specific categories of people such as remittance tax on expatriates, adding that taxes like Value Added Tax (VAT) or selective tax must be enforced on all including expatriates and citizens. Also, Head of Hotel Owners Association and Chairman of Al- Salhiya Real Estate Company Ghazi Al-Nafeesi highlighted his support for enforcement of a just tax system; however, he is against the enforcement of taxes at present, as such a move will not be correct.

In addition, an economic and fi- nancial expert Thamer Al-Naqeeb said the imposition of any type of tax will negatively affect all components of the society including expatiates and citizens as well as companies.

He said applying a tax system in Kuwait is similar to a double-edged sword, indicating that taxes in the western countries are connected with provision of high-quality services in various fields including health and education. He added that enforcement of a tax system in the country requires suitable economic environment.