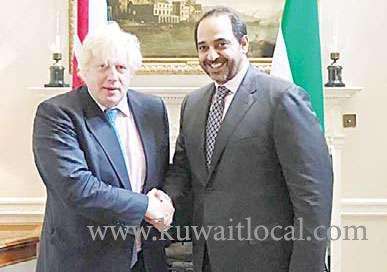 Britain and Kuwait on Thursday urged parties of the Gulf crisis to activate dialogue among member States of the Gulf Cooperation Council and act for safeguarding solidarity among the GCC countries.

The joint call came after a meeting between British Foreign Secretary Boris Johnson and the visiting Kuwaiti Minister for Cabinet Affairs and Acting Information Minister Sheikh Mohammed Al-Abdullah Al-Mubarak Al-Sabah. The UK Foreign Office affirmed in a statement London’s support for the Kuwaiti mediation to resolve the Gulf crisis, emphasizing its commitment to coordinate and cooperate with the State of Kuwait to de-escalate tension in the Arabian Gulf.

They also urged all parties to strengthen their efforts to fight terrorism and extremism, including work to counter terrorists’ financing and reduce support for extremist groups, building on progress already made. Sheikh Mohammed Al-Abdullah on Tuesday held talks with the US Secretary of State in Washington, discussing issues of common concern and the GCC affairs.

This came during a meeting held between Kuwait’s Minister of State for Cabinet Affairs and Acting Minister of Information Sheikh Mohammad Al-Abdullah Al-Mubarak Al-Sabah, and French Foreign Minister Jean-Yves Le Drian, Kuwait Embassy said in a statement today. The two sides also discussed some issues of common concern, it added.

The French minister stressed his country’s support for His Highness the Amir’s efforts for healing the Gulf rift and reducing tension in the region, it noted. He called for containing the crisis within the framework of the GCC member states. The visit by Sheikh Mohammad Al-Abdullah is part of a tour that included the United States and Britain and aimed to discuss the latest developments towards the current crisis, it pointed out.