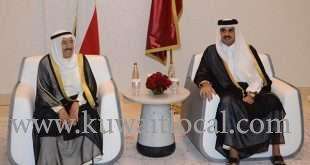 Qatar supports Kuwait’s mediation efforts to end a rift with Saudi Arabia and other Arab states and is ready to engage in talks that conform with international law, its foreign minister said on Monday. His Highness the Amir Sheikh Sabah Al-Ahmad Al-Jaber Al-Sabah has pledged to continue his mediation efforts to reconcile GCC member states. “It is difficult for us, the generation that built the Gulf Cooperation Council (GCC) 37 years ago, to see these disagreements between its members which may lead to undesirable consequences,” said HH the Amir Sheikh Sabah. “I personally lived through the first building blocks of this council nearly four decades ago, so it is not easy for someone like me as a leader to stand silent without doing everything I can to bring brothers back together.”

His Highness the Amir made the pledge in remarks during the reception for the Chairman of the Arab and International Relations Council Mohammad Al- Sagr at Bayan Palace, to be published by Al-Jarida daily Tuesday.

His Highness the Amir pledged that he would not be hampered by fatigue or any difficulties in his quest to re-establish the bonds and tackle the differences among the GCC States. “This a duty that I will not abandon,” he stressed, pledging to continue the efforts to tackle inter-GCC differences. His Highness the Amir, in the efforts to reconcile the GCC countries, had visited Saudi Arabia, the UAE and Qatar, holding talks with the top leaders that drew much applause from various quarters. “We in Qatar are prepared to engage in dialogue positively, but in accordance with the international norms and standards that govern any dialogue as per international law,” Sheikh Mohammed bin Abdulrahman al-Thani told a news conference in Paris.

The minister said Qatar “still had no clue” why Saudi Arabia, the United Arab Emirates, Bahrain and Egypt cut diplomatic and transport ties a week ago. They have accused Doha of backing terrorist groups and close ties with Iran, something the minister denied categorically. Qatar denounced the sanctions imposed against Doha by Saudi Arabia and its allies as “unfair” and “illegal”. “Whatever relates to our foreign affairs … no one has the right to discuss,” Sheikh Mohammed told reporters in Paris.

He called for “dialogue based on clear foundations” over accusations that Qatar supports extremist groups. “Qatar is willing to sit and negotiate about whatever is related to Gulf security,” he added. Qatar Monday announced it had launched direct shipping services to ports in Oman, a move that bypasses a Gulf “blockade” on a country largely dependent on food imports.

Qatar’s port authority announced the launch of two new services from Hamad Port to Oman’s Sohar and Salalah ports, circumventing the need for cargo to stop in the neighbouring United Arab Emirates. The UAE had for decades served as a central stopping point in cargo shipments. Qatar’s Hamad Port is 420 nautical miles from Sohar Port and 1,131 nautical miles from Salalah. Saudi Arabia, the UAE and Bahrain are among several countries which last week announced the suspension of all ties to Qatar over what they say is the state’s support for extremist groups and its political proximity to Shiite Iran.

Qatar denies the allegations. The emirate is the world’s largest producer and exporter of liquified natural gas, but the wealthy emirate also relies heavily on imports for food staples and raw materials. Analysts estimate that at least 40 percent of all of Qatar’s food supplies are transported across its land border with Saudi Arabia.

Riyadh last week closed the Qatari peninsula’s only land border, threatening the import of both fresh food and raw materials needed to complete a $200-billion infrastructure project for the controversial 2022 football World Cup. Saudi Arabia’s arch-rival Iran on Sunday announced it had sent five planes carrying produce to Qatar. Three ships carrying 350 tonnes of food are also set to leave Iran for the emirate. Turkey is also tipped to play a major role in supplying Qatar with food. Kuwait, which is now leading mediation efforts, and Oman are the only Gulf Cooperation Council members which did not take measures against Qatar in the worst diplomatic crisis to hit the region in years.

Britain on Monday urged Gulf states including Saudi Arabia to ease a blockade of Qatar and to find an immediate solution to the impasse through mediation. “I am also concerned by some of the strong actions which Saudi Arabia, UAE, Egypt and Bahrain have taken against an important partner,” Foreign Secretary Boris Johnson said after meeting Qatar’s foreign minister, Sheikh Mohammed bin Abdulrahman al-Thani. Johnson said he would urge them “to ease the blockade on Qatar”. “I call on all states to take immediate steps to de-escalate the situation and to find a rapid resolution through mediation,” he said. Johnson will meet with his counterparts from Saudi Arabia, Kuwait and the United Arab Emirates later this week.

Italy and Qatar agreed on Monday to continue their close economic and financial cooperation, the two countries’ said in a statement on Monday that signalled Italian support for the beleaguered Gulf state. Qatari Finance Minister Ali Sherif al-Emadi met Italian Economy Minister Pier Carlo Padoan in Rome on the first leg of a tour of major Western capitals that will also take him to Paris, London, Berlin and Washington. The United Arab Emirates will not deport Qataris who are married to Emirati nationals, Abu Dhabi-based newspaper The National reported on Monday, a week after severing ties with Doha and giving Qataris 14 days to leave.

Before the decision Gulf Arab citizens could easily travel, reside and work across the six member states of the Gulf Cooperation Council (GCC). The restrictions have left thousands of Qataris cut off from relatives in a region where cross-border marriages are common and Gulf rulers refer to each other as “brothers”. “Qataris married to Emiratis will not be deported,” The National wrote on Monday, without giving a source for the information. “UAE airports and borders have been ordered to allow any Qatari citizens who are immediate relatives of Emiratis to pass through,” it added.

Reuters was not immediately able to verify the report. The move appears to be part of recent efforts to lessen the human toll of the rift. On Sunday authorities in the UAE, Saudi Arabia and Bahrain said they were setting up hotlines to help families with Qatari members, without elaborating. Saudi state news agency SPA reported late on Sunday that King Salman has ordered authorities to “take into consideration humanitarian situations of Saudi-Qatari joint families,” appearing to clarify the previous announcements.