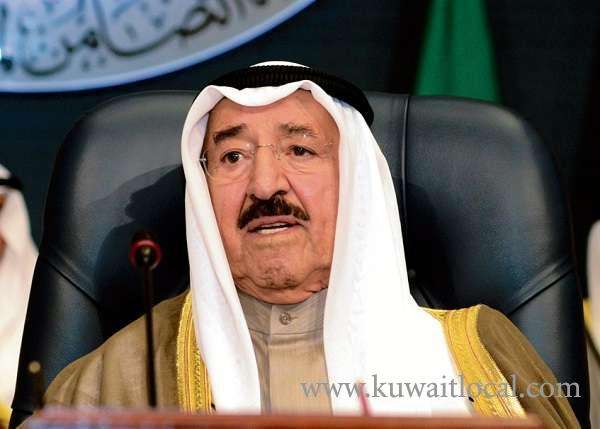 Amir Sheikh Sabah Al Ahmad Al Jaber Al Sabah said that he felt bitter and extremely concerned over the unprecedented developments dramatically unfolding in the Gulf.  However, Sheikh Sabah said that he was determined to carry on with his efforts to mediate in the crisis that came out in the open on June 5 between Bahrain, Saudi Arabia, the United Arab Emirates and Egypt on one side and Qatar on the other.

“We will not give up our historical responsibilities and we will remain committed to them until the negative developments are over and our skies are clear again,” he said. Sheikh Sabah said that the support he has received from all sides has eased the pain of developments and increased the determination to address them.

“The positive reactions and the support for our efforts to contain these developments as well as the backing of our brothers and citizens, expressed through social networking and local media and the comprehensive statements by Kuwaiti civil society organizations embodied the sense of historical ties established between the Gulf Cooperation Council (GCC) states and the common history and destiny of their people.”

Shaikh Sabah said that the progress and achievements of the GCC, the alliance, set up in 1981 and comprising Bahrain, Kuwait, Oman, Qatar, Saudi Arabia and the United Arab Emirates, should continue and must not be compromised.

Some analysts claimed the current crisis would mean the end of the GCC, an argument that has been regularly refuted amid calls for a better understanding of the standoff.

UAE State Minister for Foreign Affairs Anwar Gargash has regularly stressed the significance of understanding the true context and dimensions of the dispute, especially that more people and countries said they planned to mediate to reach solutions. Gargash had a clear message for them: There can be no permanent solution without addressing three fundamental issues.

“The Qatar crisis is about the absence of trust, extremism and terrorism, and undermining regional stability. Solution must address all of the above,” he posted on his Twitter account. “Diplomacy must address Qatar's support for extremism and terrorism and for undermining regional stability. A temporary solution is not a wise one.”

The senior UAE official reminded everyone that “Qatar's personal project since 1995 has been disastrous for the region.” “At its core, there is support for extremism and terrorism. We have a unique opportunity to change that,” he posted. “This is not four Gulf states feuding. Central to the crisis is a very wealthy state promoting an extremist agenda, and in many cases, terrorist organisations.”