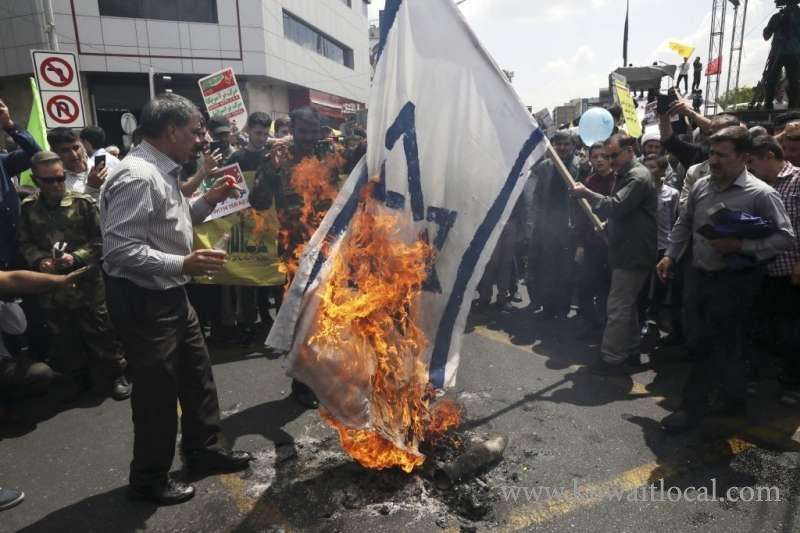 Iranians in the capital Tehran set fire to effigies of U.S. President Donald Trump, while in the Iraqi capital, Iran-backed militiamen marched over a large Israeli flag as part of rallies Friday marking Quds, or Jerusalem Day. The annual protests come as the Trump administration tries to market its long-awaited Israeli-Palestinian peace plan.

Held each year on the last Friday of the Muslim holy fasting month of Ramadan, Iran has marked Quds Day since the start of its 1979 Islamic Revolution by the late Ayatollah Ruhollah Khomeini. Al-Quds is the Arabic name for Jerusalem, and Iran says the day is an occasion to express support for the Palestinians.

Israel views Iran as its archenemy in the Mideast. Iran does not recognize Israel and supports the militant groups Hamas and Hezbollah.

This year’s protests took place as the White House is promoting the June 25-26 meeting in the Gulf state of Bahrain as the first phase of its Mideast peace plan. That plan, whose specifics have yet to be released, supposedly includes large-scale investment and infrastructure work in the Palestinian territories, much of it funded by wealthy Arab countries. The plan’s political vision has not been outlined, but glimpses of the plan suggest it sidelines or ignores the longstanding goal of independence and has already been rejected by Palestinian leaders and much of the Arab world.

Palestinian leaders say they won’t attend the summit in Bahrain. American officials say the Bahrain conference will not include the core political issues of the conflict: borders of a Palestinian state, the status of Jerusalem, the fate of Palestinian refugees or Israeli security demands.

As rallies began across the Iranian capital, demonstrators set fire to American and Israeli flags, as well as effigies of President Donald Trump and Israeli Prime Minister Benjamin Netanyahu. The rallies all headed to Tehran University, where the ceremony ended at Friday’s noon prayers. Similar rallies took place in 950 cities and towns across the country.

Many high-ranking Iranian officials attending the rally in Tehran, including President Hassan Rouhani and Foreign Minister Mohammad Javad Zarif. Both men derided the Trump administration’s so-called “Deal of the Century” peace plan, saying it would end in failure.

During the rally in Tehran, Zarif said: “It is unfortunate that some Arab leaders have this illusion that if they stand beside Netanyahu, they can reach their goals.” The remarks were carried by a Telegram channel affiliated with Iran’s state TV.

Iran’s semi-official Tasnim news agency said police in the western province of Kordestan had blocked a terrorist operation ahead of the Quds Day rally in Sanandaj city. Three alleged militants were arrested, though the report did not specify where they were captured or their affiliation.

In Iraq, hundreds of Shiite militiamen held a military parade on Palestine Street in central Baghdad, some of them setting fire to Israeli and U.S. flags.
“The people in our region and the world are harassed by Trump’s and the United States’ polices, which are trying to dominate the will of the people. Today, there is a broad rejection of Trump’s decision to annex Jerusalem and consider it the capital of Israel,” said Moin al-Kazemi, leader of the Iranian-backed Badr movement.

The rally was organized by Iranian-backed militias collectively known as the Popular Mobilization Forces. Militiamen in uniform marched with yellow flags, escorted by Iraqi federal police cars. “We will pray in Quds,” read some of the banners.

In the Syrian capital Damascus, a few hundred Syrians and Palestinians marked Quds Day by marching from the Hamidiyeh bazar in the old city to the landmark Umayyad Mosque, some of them shouting anti-Israel slogans and waving Syrian and Palestinian flags.