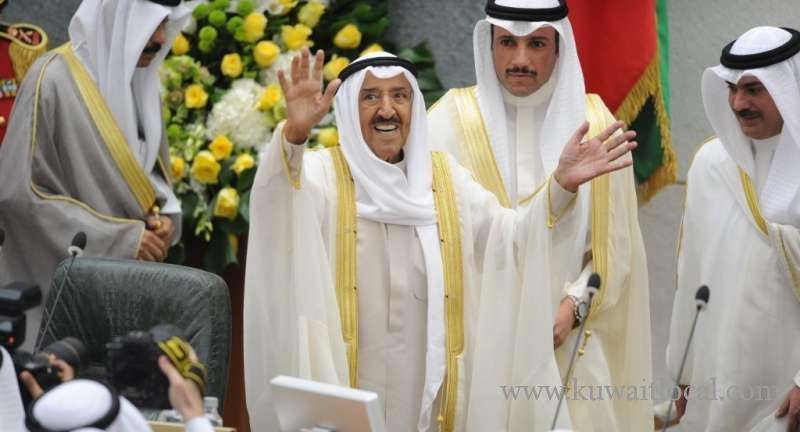 His Highness the Amir Sheikh Sabah Al-Ahmad Al-Jaber Al-Sabah said Tuesday that to protect Kuwait from internal and external conflicts, the people of the country should unite and cast away their differences and work together for a better future.

In his address to the fourth ordinary session of the National Assembly’s 15th legislative term, His Highness the Amir said that the region was going through an exceptional and unprecedented phase with conflicts and instability occurring in nearby countries.

As a result, the people of Kuwait must take into consideration the importance of national unity and solidarity to overcome any obstacle that may cause harm to the country, affirmed His Highness the Amir. On the GCC dispute and the situations in some parts of the Arab world, His Highness the Amir said that the GCC countries and Arab world must overcome differences and set sight on the overall benefit and welfare of the peoples or else they might meet an ill fate similar to various countries and regions.

His Highness the Amir warned against the use of outlets such as Social Media and others to create discord and promote sectarianism. His Highness called on the National Assembly to take proper steps focusing on the development of Kuwait and its people in cooperation with the Government, affirming that the executive and legislative branches were both established to serve the interest of the public.

His Highness the Amir renewed his trust in Speaker of the National Assembly Marzouq Al-Ghanim and His Highness the Prime Minister Sheikh Jaber Al-Mubarak Al-Hamad Al-Sabah, wishing them both the best in attending to their duties during this legislative term. The State of Kuwait, like many vigilant countries, must meet challenges and conflicts with patience and wisdom, said Al-Ghanim Tuesday.

Addressing the fourth ordinary session of the National Assembly’s 15th legislative term, the Kuwaiti top lawmaker indicated that current conflicts in the region seemed to reach crescendo in terms of complexity and worrying developments; however, countries with clear vision and maturity are able to sail through the sea of turmoil by cooperation between leadership and people. Al-Ghanim began his speech by quoting from the Holy Quran – “He created me, and He does guide me, and Who feedeth me and waterth me. And when I sicken, He healeth me” (Surra Al-Shua’ra, Verse 78-80). He revealed that he was worried about the health of His Highness the Amir until he recovered and returned home, thanks to Allah.

Al-Ghanim then spoke about the current regional conditions, explaining that there are two options available – either act and then become a part of the problem or try hard to follow up closely with the utmost awareness. The second option is the decision taken by His Highness the Amir who preferred to take part in dealing logically with the issues and settling the disputes. His Highness the Amir adopted the speech of wisdom and reasoning, taking a neutral stance between the disputing parties. He decided to play the role of a just mediator.

Al-Ghanim highlighted the importance of national unity, which has always been the basic aim of the Constitution, adding, “All the water of the oceans cannot sink a firm ship when no water can leak inside it”. He referred to a recent speech by His Highness the Amir when he called upon everybody to learn from the lessons of the situations in the surrounding region.

Al-Ghanim pointed out the recent attempts aimed at spreading suspicion in the society by defaming certain individuals, affirming that such miserable attempts have failed.

He stressed that freedom of speech has nothing to do with telling lies and offending others, but it is important to consider serious criticisms and objective observations about real shortcomings in some services. “Admitting the existence of the problem is the first step, and searching for solutions to the problem is the second step”, said Al-Ghanim, adding that it is not the duty of the citizens to provide solutions but the duty of the government and National Assembly.

He emphasized the importance of proper use of the monitory power given to the legislative authority represented by the National Assembly in order to obtain citizens’ trust, adding, “If this principle is not properly followed by the MPs, the monitoring tools will transform into means for blackmail and bargaining”.

Al-Ghanim said the National Assembly has several issues that have remained unsolved for a long time, stressing that the solutions require sincere efforts. He affirmed that the important issues include safeguarding the Kuwaiti identity by confronting the spread of fake citizenships, as well as finding a remedy for the Bedoun problem, which must be solved in order to preserve the identity of Kuwait and the humanitarian aspect as well.

Al-Ghanim addressed the government, urging it to provide evidences of its commitment to executing a comprehensive program with full solidarity and coordination. He said the citizens are always looking forward to more achievements in all fields – administrative, political, financial, and in the field of services.

Al-Ghanim explained that he had submitted a request in the previous legislative term about the need to appoint a government spokesman. His request was met but the appointed spokesman rarely talks. However, it is not the fault of the spokesman but that of the government which does not supply him with the required information to respond to the submitted questions.

He expressed gratitude to the government for some achievements such as Kuwait being one among the top ten countries in terms of improving the business environment as well as in the international competitiveness index in which Kuwait’s place has witnessed a noticeable advancement. The National Assembly Speaker called upon His Highness the Prime minister to ensure a leap in the performance of the government, by questioning the ministers responsible for the shortcomings in their ministries, adding, “Otherwise, the people will question them via their representatives in the National Assembly”.

He indicated that the government will refer the “conflict of interest” law to the National Assembly in light of the observations raised in the verdict issued by the Constitutional Court in this regard. His Highness the Prime Minister elaborated on the current conditions of the region that threaten the security and stability of Kuwait. He said, “Thanks to Allah, Kuwait is ruled by the wise leadership of His Highness the Amir during such hard times”, praising the efforts exerted by His Highness the Amir to settle the Gulf dispute based on his keenness for unity among the GCC countries.

Concerning Arab issues, His Highness the Prime Minister affirmed that Kuwait has worked hard aiming to settle all Arab- Arab disputes in all levels and on every occasion. Regarding the global aspects, His Highness the Prime Minister said Kuwait has been working hard through its membership in the UN Security Council to shed light on Arab and Islamic issues. He stressed that Kuwait exerted tremendous efforts to defend the Arab and Muslim issues topped by the Palestinian issue, which represents the main and central issue for all Arabs and Muslims.

His Highness the Prime Minister said Kuwait enhanced its role of defending and supporting humanitarian issues as part of its religious and moral commitments. He elaborated on the achievements of the government such as completion of a number of strategic developmental projects including construction of Jaber Causeway, execution of the first phase of Shaddadiya University, and launch of the second phase of the fiberglass network that enhances the infrastructure of communication and information technology aspects. His Highness the Prime Minister also highlighted the achievements in the field of housing welfare, revealing that a Kuwaiti-South Korean company will be created for establishing the first smart city in South Sa’ad Al-Abdullah City.

He pointed out the leap witnessed in the health sector, especially the initiative taken by health cities aimed at considering Yarmouk area as a medical city by World Health Organization (WHO) that serves as an example of the successful cooperation among the public sector, private sector and civil society organizations. He also highlighted the inauguration of a number of globally modern hospitals. His Highness the Prime Minister said the government seeks the completion of a number of oil projects such as Al-Zour Refinery and bio-fuel project which are expected to bring great revenues, adding that the government finished the first phase of the Shaqaya project for sustainable energy which will provide about 15 percent of the required electricity by the year 2030. He said, “Based on the directives of His Highness the Amir, the government prioritizes supporting the youth and providing them with job opportunities in all fields”.

He affirmed that the government launched a national strategy for youth as the main tool for empowering the youth in different fields. He highlighted the inauguration of the innovation and creativity center, which is the custodian of the initiatives of the youth. He said the lifting of the ban on Kuwaiti sport brought glad tidings to the Kuwaiti youth to realize achievements in the field of sports on the global level.

His Highness the Prime Minister revealed that four tenders were floated in the 2019/2020 fiscal year as per partnership projects between public sector and private sector in different fields including real estate, drainage, waste treatment and tourism. He affirmed that the government shows great consideration to the New Kuwait 2035 vision of His Highness the Amir, indicating that Kuwait has starting bearing the fruits of improvement of the business environment and enhancement of economic competitiveness, which contribute to improving Kuwait’s rank in the international indexes. His Highness the Prime Minister said the government prioritizes the services provided to the citizens, highlighting the recent changes that facilitated the completion of transactions such as implementation of online services and electronic interfaces among different state bodies. He cited the World Bank 2020 report in which Kuwait was placed among the top ten countries in terms of improving the business environment. He affirmed that the recent decisions resulted in receiving foreign investments exceeding $ 1.5 billion, which are expected to exceed 4.4 billion next year, adding that Kuwait’s place on the international index for competitiveness went up eight places, whereby it is now in 46th position out of a total of 141 countries.

His Highness the Prime Minister highlighted the efforts exerted by the government to confront corruption including implementation of the national strategy for transparency and confronting corruption. He said the government will soon submit the third five-year developmental plan, which aims at enhancing the role of private sector and minimizing the role of the government, and shifting to e-government system with the aim of improving the national economy. His Highness the Prime Minister praised the cooperation of the National Assembly in preparing the law for solving the Bedoun issue in order to find a radical and final solution to the complex issue.