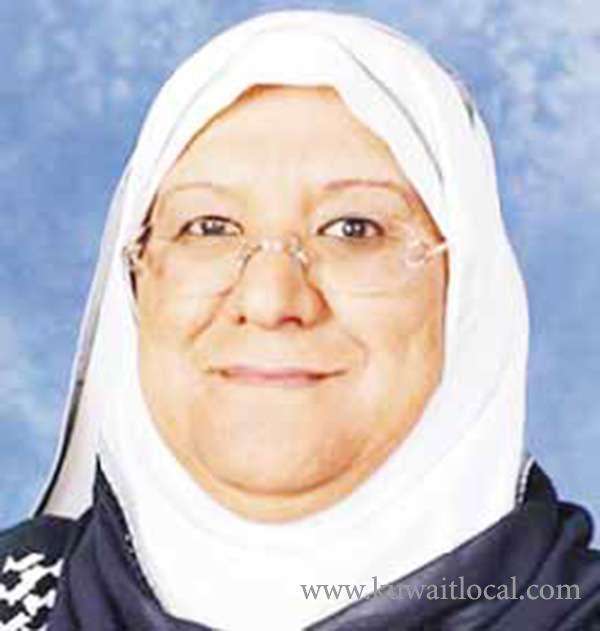 A dynamic lady with great energy

This is the first in a series of articles on Professor Masouma Saleh Al Mubarak, a dynamic lady and the first woman appointed minister in the history of Kuwait.               – Editor

Special to the Arab Times

Professor Masouma Saleh Al Mubarak is a cultured lady, the first Kuwaiti woman appointed Cabinet Minister in the history of her country.

Growing up in a happy family surrounding enhanced by the love of father and mother Dr Masouma developed a well balanced mind with an inquisitive bent on the world around her.

Throughout her scholastic year the support and encouragement of her family made her to excel and gain her PhD in Political Science, a field that fascinated her since early childhood.

Seeing her father listening to the news, hearing his comments and the heated discussions of neighbours coming to the house discussing what was going on in the Arab world made her pondering on questions – why there are wars and revolutions in the world? Why people are fighting and killing one another? What rules the world? How communities living together and become organized?

Questions and more questions were rising in her young mind becoming deeper and more intriguing as she grew older.

Politics is a large field; it is closely related to law, to history, to economy and economic geography.

It began with the Greek philosopher, Aristotle stating that “Man by nature is a civic animal.”

Humanity has been trying to master the art of living together harmoniously since the beginning of settled communities, which through laws and Divine sanctions achieved some form of organization. Most of those organizations were soon spoiled by the conflict of power, which escalated to armed conflicts that developed into wars and revolutions, which became more terrible and bloody with every new technological development.

Seeking a deeper understanding in the whole situation she also deepened her study on Women Rights and on Human Rights, the answers she discovered through her reading brought her closer to the source of the problem that triggered all those questions, to which she sought the key to the best solution.

Obviously wise, holistic planning is the most crucial step in any endeavour, whether it concerns governments, corporations or one’s private life, a judicious and clever planning can avoid problems and make every endeavour more successful and satisfactory.

Dr Masouma Saleh Al Mubarak was born on the 19th of November 1947 in the Shark district of old Kuwait town in a middle-class family.

Her father, Saleh Al Mubarak was a religious man, a Mullah by profession. Unlike many of his colleagues in his days he was remarkably open-minded especially regarding education, which he deemed necessary for both boys and girls. He was therefore in favour of the Education Department’s decision in opening the first school for girls in 1937, which the conservatives stood firmly against it deeming it was waste on girls.

Sheikh Abdullah Al Jaber was the champion in the emancipation of women in his country, being a highly cultured man he saw in the education of women the key to his country’s development, hence he not only engaged some teachers from Iraq to teach women in their home as soon as he established the education department in 1936, he opened the schools for boys and girls in 1937, pointing out to the protesting conservatives that cultured mothers were needed in the development of the new generation of men and women preparing them for their active involvement in the progressive strides of their country.

When the Sheikh sent the first group of girls to the Cairo University, Egypt in 1956, there were still oppositions from the conservatives, he met greater opposition in 1966 when he opened the Kuwait University for boys and girls, but to the outraged conservatives he pointed out “This is the time when young men and women need to know one another as young adults with their own mind, their own individuality.”

Because the women were excelling in their study, they were spurring the young men to compete with them; at the same time most marriages carried out at that time were very successful.

Mullah Saleh was a moderate man, affectionate and kind, he nurtured his children on the high principle of the true Islamic teaching and on the nobler cultural traits of his race. He married twice, he had 2 sons from his first wife and 4 girls from his second wife, the mother of Masouma, a sweet lady who was also strongly in favour of an education for her girls.

Masouma was the second born in her family, she was a lively little girl happy to be with other kids, but also given to pondering.

Her house was close to the sea, hence, as most kids she loved to spend time on the beach, splashing in the water, playing with the sand, watching the women doing their laundry at the water edge with their younger children playing in the water near them.

Sitting on the beach, nurtured by the rhythmic cadenza of hammering coming from the shipyards nearby, and the song of sailors rising the sail echoing in the distance, it engaged her imagination with reveries and dreams of far away lands beyond the horizon, lands she was hearing about with descriptions of tall mountains, luscious valleys and strange customs.

The seafront of Kuwaiti City in those days was nothing like the transformation it underwent from the sixties!

In those frugal days it reflected the picturesque laborious life it served so well, with shipyards and small harbours all along the stretch of the coast from what is now the port of Shuwaikh to the Kuwait Towers complex.

From the shipyards came the rhythmic cadenza of hammering going-on from sunrise till sunset all the year around, and in the small harbours (Neqaa) belonging to rich merchant families there were boats of many kind including the majestic Dhow, an Ocean-going sailing ship.

After a flare of exceptional activity during the Second World War, when sailing ships were in great demand,the local shipping industry began to decline, but by then the first shipments of crude oil were leaving the country and sailors sought employment in the oil industry and in other profitable occupations.