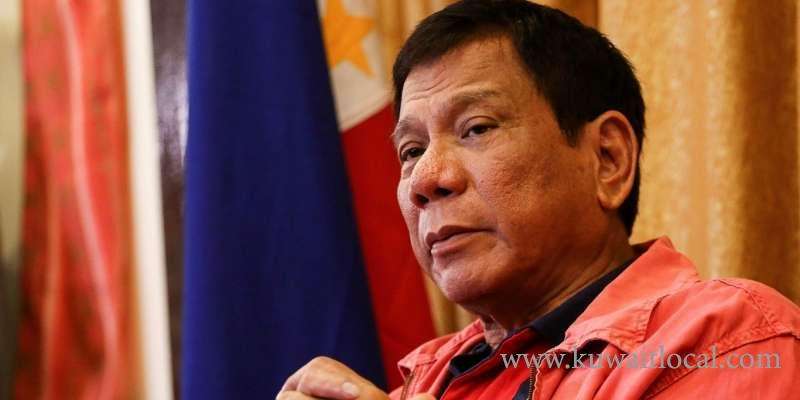 The President of the Philippines Rodrigo Duterte intends to visit Kuwait to express gratitude to the Kuwaiti government for taking measures to protect Filipinos working in the country. In a report published on cnnphilippines.com Tuesday, Duterte was quoted as saying: “I am going to travel to Kuwait to thank them because they practically gave in to my demands.” Duterte disclosed his demands included granting workers one day off each week, allowing them to hold their passports and mobile phones, no body contact between employers and workers, and allowing the workers to cook their own food. Admitting that he was harsh in the early stages of talks with Kuwait, Duterte pointed out, “They let my cursing pass.” However, Duterte did not announce the date of his visit to Kuwait.

Kuwait and the Philippines signed an agreement last month, stipulating the implementation of a system for Kuwaiti authorities to regularly inspect or monitor the situation of domestic Filipino workers.

The agreement specified Kuwait’s Department of Domestic Labor as the institution in charge of settling disputes between the employers and Filipino domestic workers. Kuwait also agreed to provide legal assistance to workers and they will not pay for judicial fees at all levels of proceedings. In another development, GMA News reported online that 59 Filipina domestic workers from Kuwait returned home Monday evening in line with the ongoing repatriation program, which is part of the Memorandum of Understanding (MoU) signed by the two countries to protect Filipinos working in Kuwait.

Previously, Labor Secretary of the Philippines Silvestre Bello III announced the repatriation of 644 distressed Filipino workers in Kuwait; whereas Labor Attaché Resty De la Fuente said more than 300 Filipinos are expected to return home before the end of this month.