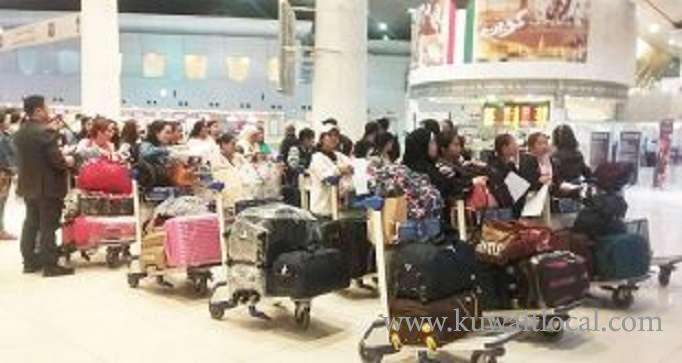 The sources say there are approximately seven thousand Filipinos who have completed all their formalities and are waiting to fly to Kuwait from Manila but are unable to leave the country under the existing ban. The sources told the daily “travel to Kuwait was permitted for those who had completed their transactions before five o’clock last Friday,” according to what Al-Rai had reported in its Sunday edition, quoting an official decision issued in Manila.

The sources added, the Philippine ban came into effect as a large number of Filipino domestic workers were about to leave Manila for Kuwait Monday. The Philippine Chargé d’Affaires in Kuwait Mohamed Noureddine Le Mondotot, told the daily, “the domestic worker who wants to return to Kuwait must obtain a letter from the Philippine Ministry of Labor before heading to the airport and completing travel procedures.” He explained the letter must show the concerned employee is excluded from the ban imposed by the Philippine government, since they had signed contracts provided the OFW left before five o’clock last Friday.

In the same context, members of the Association of Filipino Employment Agents in Kuwait held a meeting at the Philippines Embassy in Kuwait, and sent a letter to the Filipino Minister of Labor signed by 250 members to allow the travel of all those whose transactions have been completed and full fees paid to the Ministry of Labor, saying this ban will cause them material losses.”

In a statement to Al-Rai, the head of the Federation of Owners of Domestic Workers Offices, Khaled Al-Dakhnan, affirmed that “the file of Filipino domestic workers is in the hands of the Kuwaiti Ministry of Foreign Affairs, and the end of this file and its solution depends on what the ministry will do.” He pointed out that the ban was imposed following the recent ‘murder’ of the Filipina. Also among the reasons is the delay in signing the Memorandum of Understanding between Kuwait and the Philippines.

The Kuwaiti Society for Human Rights confirmed that the crisis between Kuwait and the Philippines have come to haunt again because of the lack of societal awareness of the rights of domestic workers as some employers violate the applicable local laws, conventions and international agreements ratified by Kuwait.

The association’s board chairman Khaled Al-Hamidi asserted in a statement to Al-Rai that the solution to the Filipino labor file crisis which pops up from time to time, does not lie in the patchy solutions. The Al-Anba daily quoting diplomatic sources revealed the latest ban imposed by the Philippine government follows the death of an Overseas Filipino Worker at the hands of her Kuwaiti employers.

The sources indicated the ban applies to domestic workers, Article 20, and excludes the technical and trained manpower. The sources indicated that the workers who had visas before Jan 5, could still leave the Philippines and abide by contracts, but those who were contracted after this date will not be allowed to leave. As for the workers who are spending holidays in their country and have valid contracts are entitled to return.