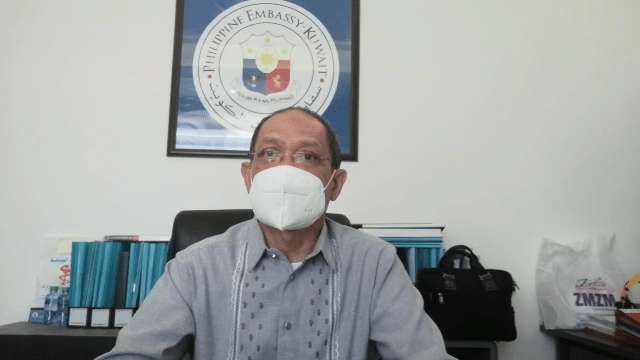 Charge D Affaires of the Embassy of the Philippine in Kuwait provided updates on the two scheduled chartered flights for Filipinos stranded in Kuwait during the lockdown periods and gave details on the numbers of OFWs who applied for passports renewals and extensions.

In an exclusive interview with The Times, CDA Lomondot stated that after a long lockdown phase in the Philippines and quarantine period in Kuwait and after resumption of his post as CDA, he immediately addressed the most essential issues of OFWs. One of them was the current status of several OFWs and their families who were stranded due to lockdown and do not have permits to land in the Philippines by aircrafts from overseas. Many of these OFWs have purchased air tickets but could not return home and some of them have expired visas and could not travel before due to no flights available. Arrangements have been made with Philippine Aviation Authority and Kuwait via Kapico Travel Agency in Kuwait to arrange the flights on behalf of 320 passengers.

“There will be two flights, one is to depart tonight at 9 PM and on 1st of July 2020 with same numbers of passengers,” said CDA Lomondot. He urged all OFWs to contact the embassy and coordinate their flights as the embassy can request for additional flights for OFWs to return home.

CDA Lomondot also provided updates on the recent changes made on passport processing and schedules for OFWs. He said that after he resumed office, he opened schedules of passports for extensions and renewals. The embassy was able to gather 2,000 over passport applications and will be addressed immediately prioritizing those whose visas have expired or will expire soon as well as passports validities. About 10% of those who applied are facing problems with passport validity and 90% are pertaining to visa renewals. OFWs will be contacted soon and schedule of appointment will be given.

He urged all OFWs to address their concerns to the embassy and will try its best to attend to them with urgency. The appointment system will open again as soon as the first batch of applications have been addressed. CDA Lomondot personally led the embassy, OWWA and POLO teams to ensure the success of the chartered flights.