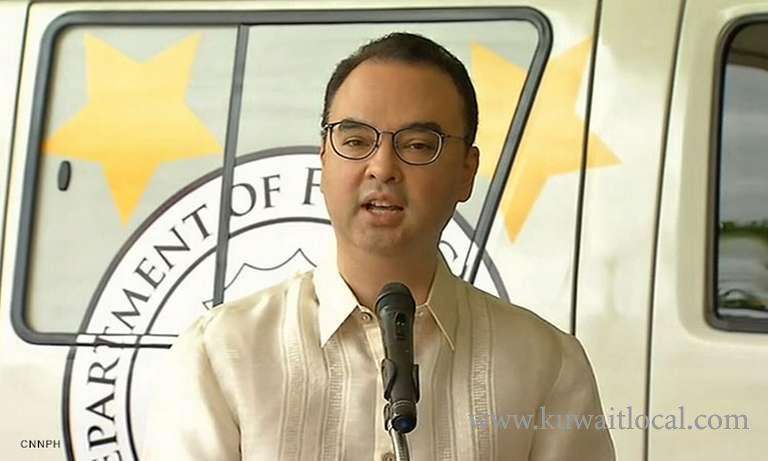 The Philippines relayed requests to Kuwait that must be met before it can lift the deployment ban and sign a memorandum of understanding (MOU), Foreign Affairs Secretary Alan Cayetano said on Friday.

[Translation: We requested for four, five things from Kuwait before signing and lifting the (deployment) ban.]

One of the requests is to help 120 overseas Filipino workers (OFWs) who called the Philippine embassy seeking for assistance. Their cases range from simple requests like food and being given proper hours for sleep to extreme cases like being beaten.

"Doon ako humihingi ng pangunawa sa nagsasabi na mali ang rescue [This is where I ask for understanding from those who said the rescue was wrong]. We beg to disagree. It is within the international conventions," said Cayetano.

He added, however, that proper coordination with Kuwaiti authorities was necessary.

According to Cayetano, 35 out of 38 rescue operations were conducted in coordination with the Kuwaiti government. He admitted the remaining three were not, saying they needed to be acted on urgently.

A viral video of the rescue prompted Kuwait to accuse Philippine embassy officials of violating an international convention. It declared Philippine Ambassador Renato Villa a persona non grata and issued warrants of arrest against Filipino diplomats.

One of the other requests the Philippines raised was to allow between 600 to 800 Filipino workers in shelters to go home.

[In line with that, (we asked) that the crackdown after amnesty will not be harsh, as there are 5,000 who did not come home.]

He also asked the same of Filipino diplomats. At least two diplomats involved in the rescue mission are facing kidnapping charges in Kuwait.

"Ang aming buong paniniwala ay [Our belief is] they will follow their own processes, but they will also consider what we have been communicating to them," said Cayetano.

"The best deterrent for abusive employers ay may makasuhan at may ma-convict [is if cases are filed and they are convicted]," he said.

The comments come ahead of plans for Cayetano to join Labor Secretary Silvestre Bello in a visit to Kuwait next week.

Cayetano denies letter
Cayetano also denied the existence of a letter signed by career diplomats which called for his resignation.

"There's no such letter. We haven't seen it. I've asked around, no one has seen it," Cayetano told the press on Friday.

The Philippine Star first reported diplomats wanted Cayetano out for "gross incompetence" on Wednesday. It was reportedly sent to the President.

Cayetano previously said that his critics should not involve the department and career officials in calls for his resignation. He added that in his meetings with those in DFA, his collagues "might not necessarily agree with our direction, but they understand."

The secretary also denied there was a loyalty check and stressed that a letter was not even necessary for him to resign.

[Let four to six representatives approach me. Go to my office... and tell me, 'Sir, with all due respect, the career (diplomats) cannot support you,' (then) I will pack my bags and move out.]

Electricity restored at embassy
Cayetano also denied that electricity and water were cut off at the Philippine Embassy or at Villa's official residence in Kuwait.

"Pag nabasa na naman sa Kuwait na pinutulan daw ng kuryente at tubig, it will make it appear as if hindi sila civilized, which is not true," he said. "There was a temporary interruption ng kuryente, and then naibalik kaagad."

[Translation: If Kuwait reads that electricity and water were cut, it will make (Kuwait) appear as if they are not civilized, which is not true. There was a temporary electricity interruption, but it came back on at once.]

Filipino movements in Kuwait were reportedly restricted following the diplomatic row. Warrants of arrest were even issued against some Flipino diplomats.

However, DFA maintained in a statement released on Thursday, "at no point did [Villa] feel unsafe... to move to the Embassy."