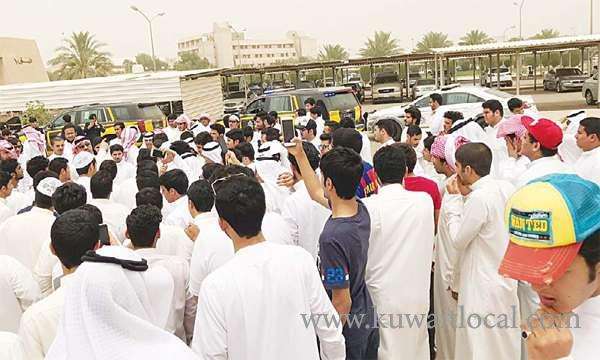 In an unprecedented move, over 100 students and activists organized a demonstration within the premises of the office of the Minister of Education Dr Hamid Al- Azmi to publicly protest against implementation of the new examination regulation and decision to reshuffl e the principals of secondary schools during the twelfth grade exams, over and above taking entrance exams to the university and scholarships, reports Al- Seyassah daily.

The minister met four of the protesting students in his office where he listened to their complaints, and responded to them by saying, “The decision to reshuffl e the principals is an administrative process that doesn’t concern you, and it will never affect you. As for the new set of exam regulation, it will only affect those who have been using phones, earpieces and other cheating devices. Therefore, the action taken will not affect you if you are not among them. The ISO Test guarantees admission of applicants who obtain 5 marks into the universities”.

Al-Azmi affirmed that any student who has a complaint against him over the decision to prevent or report cheating should approach him directly, so that he can correct the injustice and cancel the report, if it’s wrongly done.

He reaffirmed that anybody who faces any form of injustice should approach the appropriate education area for redress and their cases shall be looked into. A source revealed that the minister refused to back down from all the three decisions.

He only emphasized that no repressive action will be taken against students and affirmed that cheating acts were established with concrete proofs. He has also denied directors of the six education areas the prerogative to cancel any report of cheating and decision to prevent students from the exams. This situation may arise in case of doubt that a school principal, head of committee, invigilator or supervisor abuses a student and accuses him of cheating without concrete proof.

In the course of the protest, the minister also held a meeting with the directors-general of education in the presence of the acting Undersecretary and Assistant Undersecretary for Education Development and Activities Faisal Meqsid. He stressed the need to create sufficient, serene and calm atmosphere for students in exams.

He ruled out any injustice has been done against students, and reaffirmed that some students may have been involved in cheating before reports of cheating were recorded against them. He reiterated, “There is no amendment, cancellation or rescinding on the decisions to reshuffle public secondary school principals, in addition to the new set of exam regulation to be implemented whenever a student is caught cheating”.