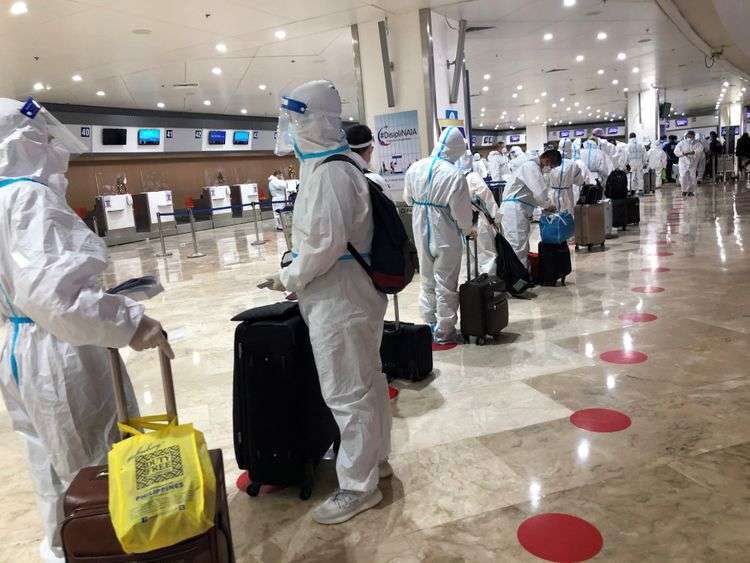 Testing and quarantine requirements for inbound travellers had been tightened in the Philippines, as the Asian country raised border controls higher over the Omicron variant.

Health authorities reported COVID-19 numbers have been on a downward slide — 603 new cases were recorded on December 5, 2021 (the 12th day it has dropped below 1,000), with 10 million vaccine doses administerd in 5 days till Friday — but stricter testing and quarantine rules kicked in.

On November 28, 2021, Manila announced that in-bound international travel of all persons, regardless of vaccination status, coming from or who have been to Red List countries/ territories within the last 14 days prior to arrival to any port of the Philippines shall not be allowed.

Here’s what you need to know:

Are there Omicron cases now in the Philippines?

The Asian country has not detected the Omicron variant so far. Three travellers who arrived in the Philippines from South Africa, Burkina Faso in West Africa, and Egypt have tested positive for COVID-19. Health authorities said their samples are still undergoing genome sequencing to determine if it’s Omicron.

Health Undersecretary Maria Rosario Vergeire told local media that one of those who tested positive for COVID-19 was a 23-year-old overseas Filipino worker (OFW) who arrived from South Africa on November 16.

At the Philippine Genome Center (PGC), scientists are racing to test samples from international travelers to screen Omicron cases. After going through 18,000 swabs, no Omicron variant has been detected, PGC Executive Director Cynthia P. Saloma said in TV interview. She said, however, that “it's possible that it has entered our borders. We are on the lookout for that.”

Plans unveiled last month to open the country to international tourists are now in the backburner as the government has imposed stricter testing and quarantine requirements for inbound passengers, which kicked in on Friday (December 3, 2021). The rule remains in place till December 15.

The new travel protocols include requiring a 14-day home quarantine upon arrival for travellers — but only from countries not classified under the “red list.”

number of travellers who arrived in the Philippines in November who have tested positive for COVID-19, according to the Philippines' Bureau of Quarantine.

I am not a Filipino citizen, can I visit the Philippines now?

According to the Bureau of Immigration, the current general travel restrictions remain the same. Only Filipino citizens, “Balikbayan”, and those with long-term visas from green and yellow list countries may be allowed entry.

ENTRY OF FOREIGN TOURISTS SUSPENDED
The Philippines suspended its decision to allow fully vaccinated tourists entry to prevent the highly-mutated Omicron variant taking off in the country where most of the population remains unvaccinated.

The Philippine Coast Guard reported on December 4 that some 242 travelers who arrived in the Philippines in November have tested positive for COVID-19.

I’m a Filipino citizen and fully vaccinated, can I fly now to the Philippines?

Yes. Fully-vaccinated Filipino citizens are required to present a negative RT-PCR test result taken within 72 hours before departing from the country of origin. Upon arrival in the Philippines, they would undergo facility-based quarantine and must re-take a swab test upon the fifth day.

What if my test returns negative?

Regardless of a negative result, they are required to undergo home quarantine up to their 14th day upon arrival.

I’m a citizen but not vaccinated, can I fly to the Philippines?

Individuals who are unvaccinated, partially vaccinated, and those whose vaccination status cannot be independently validated, are also required to present a negative RT-PCR test done within 72 hours before their departure from country of origin.

Moreover, they are must undergo facility-based quarantine upon arrival and re-take a swab test on the 7th day from arrival. Even if they yield a negative result, they are also required to undergo home quarantine up to the 14th day from their arrival.

[manila philippines vaccine covid sputnik]
A Philippine health worker administers a dose of COVID-19 vaccine. Airlines are directed to only board passengers who comply with the negative RT-PRC test-before-travel protocol.

Minors are also required to follow the testing and quarantine protocol of the parent or guardian traveling with them, regardless of the minor’s vaccination status and country of origin.

International passengers who have already arrived and are currently undergoing quarantine shall continue with the testing and quarantine protocols in place at the time of their arrival.

BOOSTER SHOTS
The Philippines now allows all adults to receive a COVID-19 booster shot six months after their second dose; those who received the J&J vaccine can get boosted at lest 3 months after vaccination.

The Department of Health (DOH) announced this on Thursday, December 2, a day after the Food and Drug Administration (FDA) granted emergency approval to Pfizer, Moderna, and AstraZeneca to be used as an additional dose.

What percentage of the country is now vaccinated?

Latest data from the National Vaccination Operations Centre (NVOC) show the country hit almost 10 million doses administered from Monday to Friday (November 29 to December 3), bringing to 72% rate of the Philippines’ target population having had their first dose of COVID-19 vaccine. About 36.8 million are now fully vaccinated, the centre reported.

What are the green-listed countries?

On November 22, the Philippines announced it was set to reopen its borders to fully-vaccinated tourists from “green list” countries/territories, which includes 44 nations and regions.

Despite the so-called green list, the Philippines Inter-Agency Task Force has suspended the entry of fully-vaccinated foreign tourists of non-visa required countries/regions from the Green List.

ENTRY PROTOCOLS FOR RED LIST COUNTRIES:
- Swabbing on 7th day (RT-PCR test) from day of arrival
- Release from facility upon completion of the mandated 10-day facility based quarantine and presentation of a negative RT-PCR result

South Korea, traditionally the Philippines’ number one tourist source, is not on the list. The Department of Tourism (DOT) recently revealed it is working on a travel bubble arrangement with South Korean officials.

What countries are on the updated Red List? What does it mean?

The IATF has released an updated international travel Red List. The following countries were added:

[20210817 vaccine philippines]
A health worker prepares to vaccinate a public transport driver with sinovac COVID-19 vaccine. In-bound travellers from countries on the red list are not allowed to fly until December 15, 2021.
NUMBERS TO KNOW
On Sunday (December 5), the country reported 603 new cases, making it the 12th straight day cases have fallen below 1,000.

On-site workers are mandated to be fully vaccinated against COVID-19 in both the public and private sectors in the Philippines, as per the Inter-Agency Task Force (IATF) Resolution No. 148-B.

Being unvaccinated shall not be a reason for termination, but unvaccinated employees must undergo RT-PCR tests regularly at their own expense whenever they need to work onsite.

The Philippine National Police (PNP) said out of its more than 222,000 personnel, 1,830 remain unvaccinated as of December 5.

The PNP, however, is expected to release a memorandum that will prohibit unvaccinated personnel from reporting for duty following with the IATF resolution.

The campaign against vaccine hesitancy of the Philippine National Police continues to gain success after the number of its unvaccinated personnel with no valid reason dropped from 1,004 to 987 or just 0.44 percent of its entire 225,676 members.