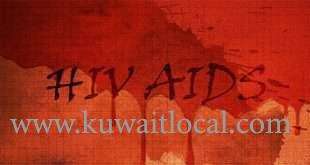 The number of AIDS patients in Kuwait has risen to 320, an increase of about 30 cases from last year, while the number of infection from the virus was about 290 in 2016.

The main reason for the increase is the drop in awareness campaigns that were organized in the past, because such campaigns to a large extent help reduce the number of AIDS patients in the country. The ministry has called for paying more attention to awareness campaigns, mainly for the benefit of young people such as film footages about the disease, ways of infection and how to avoid it.

The campaigns should be organized inside cooperative societies, central markets and commercial malls and intensifying campaigns at the Kuwait International Airport. The ministry pointed out 75 percent of the infection in Kuwait is among men and the rest women.

However, Kuwait has a low infection rate compared to other countries at the global level. The ministry pointed out, 38 babies born to infected mothers are free of the HIV virus due to the commitment of Kuwait to the World Health Organization (WHO) treatment protocol.

The Ministry of Health has authorized its bureau in Washington to offer Kuwaiti patients displaced by Hurricane Irma free flight tickets to return to the hospitals where they were being treated. As per instructions from Minister of Health Dr Jamal Al-Harbi, all Kuwaiti patients who have had their treatment disrupted by Irma would be back in hospital by Friday, read a statement issued by the ministry on Thursday.

The statement noted that those who choose to return using their personal vehicles can book for their accommodation at a cost of USD 200. The statement added that the patients will be compensated by the bureau upon providing their vouchers.