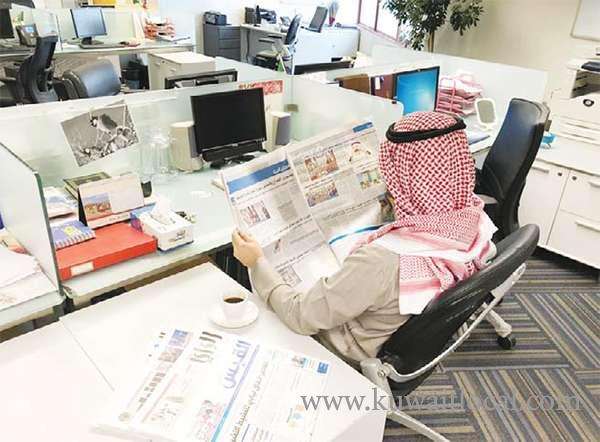 The once-a-week newspapers’ production suspension in Kuwait has left door wide open for speculations this step would either be recalculations of feasibility of overall paper production or start of transformation to online copies.

Journalists however considered the decisions by Al-Qabas, Al-Rai, Al-Anbaa and Al-Jarida dailies to stop production on Saturdays as unjust towards readers who have sentimental attachment to paper copies, who also consider the way they hold and read the paper a daily ritual.

Papers
Arab and Western newspapers have been affected by digitization of papers in the past decade, including for example the Christian Science Monitor which stopped paper production in 2009 after circulation dropped to 200,000 copies while its digital copy was read by more than a million people. “This is a 100 percent economic decision aimed at cutting cost,”

Waleed Al-Nisf, Al-Qabas Chief Editor said, and the newspapers “agreed there are difficulties in competing against electronic means.”

Al-Nisf also attributed the once-a-week production suspension to less “advertisement and the economic situation,” therefore newspapers decided to stop production for a day as a mean to overcome these troubles. Al-Nisf, in a statement to KUNA, said suspension may give newspapers’ workers a time to rest “thus have more production while cutting cost. This procedure has been adopted in the US, Europe and other parts of the world, where newspapers have one copy for Saturday and Sunday.”

He cited a US report suggesting newspapers would vanish by the year 2032, affirming Al-Qabas “plans to strengthen the electronic copy, we have big investment in this domain and we will attract more readers who will pay affordable prices for the service.”

Majed Al-Ali, chief editor of Al-Rai Newspaper, said the one-day paper production suspension would not affect number of readers because all newspapers have digital copies, which were updated round-the-clock.

Al-Ali-, citing international studies conducted in 2018, said they concluded newspapers were more “credible” than the digital copy because they “verified the story before publication, contrary to other means which consider publication speed more important than content or credibility.”

Cost
Speaking to KUNA, Al-Ali said little advertisement income and rising cost caused the one-day production suspension. “Newspapers have been suffering from losses for years, and it is time to rearrange their priorities.” Al-Anbaa Newspaper Chief Editor Yusuf Al-Marzouq brushed aside speculations one-day suspension was a beginning of permanent closure.

“The aim is to cut expenses because the whole world is experiencing an economic crisis at all fronts,” he told KUNA. Al-Marzouq said number of readers would not be affected because Saturday was a weekend anyway. Nasser Al-Otaibi, Managing Editor at Al-Jarida Newspaper, who acknowledged newspapers were suffering severe financial issues, said one-day suspension was not the end of newspapers.

“It is too early to talk about closure of newspapers in Kuwait because they are taking serious steps to prevent this,” he said. Al-Jarida, he told KUNA, would rather develop its paper copy to include more analyses, reports, interviews and features in order to counter the competition posed by the digital media. Al-Otaibi said Al-Jarida, like other papers, would compensate suspension of production of its hard copy into its digital copy and social media.