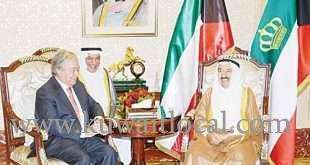 Speaking during a meeting with His Highness the Amir, Guterres said it was an enormous honor and pleasure to be in Kuwait again and “very clearly pay tribute not only to what has been the humanitarian leadership I’ve witnessed in my position and that led my predecessor to appoint you as the Humanitarian Leader, but today it’s much more than that.” Guterres also highly commended the crucial role and efforts by the State of Kuwait in all political and humanitarian issues.

“I consider Kuwait to be the voice of equilibrium, with dialogue and wisdom in the region. When I see the entire crisis, from Syria to Yemen to the new Gulf crisis, not to mention all the other places of crisis, your leadership has been the leadership of tolerance, dialogue and the bringing of people together,” said Guterres.

He said Kuwait has “no agenda but peace, understanding, security, and this was what lead me during the beginning of the crisis in the Gulf to say that the United Nations policy is very simple; it is to support Kuwaiti mediation.

“We don’t want to have protagonism, we recognize the leadership of Kuwait and we support Kuwait,” the UN chief added.

National Assembly Speaker Marzouq Al-Ghanim on Sunday received in his office United Nations (UN) Secretary-General Antonio Guterres who is currently in the country as part of his official tour in the region.  They tackled several pressing regional issues; including the Palestinian issue, Syrian file and terrorism.

On the Syrian file, Guterres praised the humanitarian role that Kuwait continues to play in helping Syrians, particularly since HH the Amir  Sheikh Sabah Al-Ahmad Al-Jabar Al-Sabah has taken the initiative to organize conferences for donor countries in a bid to provide assistance to Syrians at home and abroad.  He said HH the Amir and Kuwait dealt with this humanitarian issue at a time other countries were hesitant and unable to do anything.

Both Al-Ghanim and Guterres highlighted the seriousness of this issue, while stressing that terrorism has no religion; hence, the need to address it internationally and regionally through broader political, cultural, economic and security perspectives.

Guterres confirmed the United Nations fully supports Kuwaiti mediation efforts led by His Highness the Amir in relation to the Gulf-Gulf dispute.

He also lauded Kuwait’s role in hosting Yemeni negotiations and its position on the reconstruction of damaged Iraqi areas which were under the control of DAESH and other terrorist groups.

In another development, MP Faisal Al-Kandari said the State Audit Bureau (SAB) repeats some observations annually but the concerned authorities have yet to benefit from them.  For the second year in a row, the Central Internal Audit Unit in Kuwait Petroleum Cooperation (KPC) remains under the control of the chief executive officer and this is a violation of the rule stating that the internal audit unit must be under the supervision of the board chairman, he said.

He said the parliamentary Budgets and Final Accounts Committee highlighted this issue in its 37th report and in its annual report for fiscal 2016/2015, while SAB pointed out that KPC is not committed to rules on implementing budgets in public institutions with independent budgets, specifically in relation to the internal audit unit.

He submitted questions in this regard to Oil Minister Essam Al-Marzouq, as he wants to know if former Minister Ali Al-Amir transferred supervision of the internal audit unit to the board chairman; if yes, reasons for putting the unit under the control of the chief executive officer again, and justification for not complying with the recommendation of SAB.

He also requested for information on the Central Internal Audit Unit, its operational structure, number of employees, their names, positions and job descriptions.