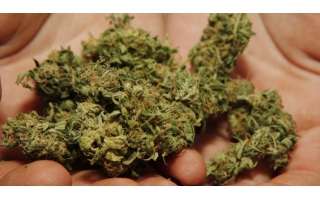 New York embarks on medical marijuana use on Thursday, becoming the 23rd US state to do so as the taboo surrounding its legalised medicinal use starts to shift. Under the legislation, five companies are authorised to grow marijuana for medicinal purposes in the state, but only one -- Bloomfield Industries -- has set up headquarters in New York City itself.

From the outside, its premises are an inconspicuous warehouse in an industrial zone of Queens, with shabby walls, boarded up windows and an entrance partially obstructed by concrete slabs. Surrounded by other warehouses, next to the highway and with no security guard nor police officer in sight, the building is home to a 23,000 square meter plant dedicated to growing marijuana.

The drug is already grown legally in Denver, Colorado and San Francisco but this plant appears to be the first set up in a major US city with a population of more than one million. Bloomfield's rivals have set up production outlets in cheaper and more discreet locations in the north of New York state.

But a spokesperson said the company did not want to hide away. "We felt strongly that we could put our best team forward with the best horticulturalists, the best scientists, the best pharmacists, the best researchers that we could if we chose to put our facility where our headquarters were, in New York City," he told AFP.

While the New York state assembly passed the marijuana legislation 18 months ago, Bloomfield and the other four firms did not officially obtain their licenses until late July. Since then they have been working around the clock to get their products ready in time for Thursday's launch.

Twenty dispensaries will eventually open across the state, but the roll-out will be gradual and patients were only allowed to start registering for treatment from December 23. Only patients with serious illnesses such as cancer, Parkinson's disease, multiple sclerosis or certain forms of epilepsy are eligible.

Nor will they be able to buy cannabis to smoke, but rather take it in pill, oil or drop form. Nicholas Vita, CEO of Columbia Care, another healthcare company registered to provide medical marijuana, estimates that only 0.5 to 1.5 per cent of the state population -- 100,000 to 300,000 people -- will be eligible.

Doctor Stephen Dahmer, chief medical officer for Vireo Health of New York, another authorised laboratory, seeks to ease any concerns. In Minnesota, where Vireo also operates, he says marijuana consumption has been much lower than expected.

None of the three firms contacted by AFP would divulge the cost of treatment but it is understood to start at around $200 a month per patient. At the moment no US health insurance company will pay for marijuana for medicinal purposes, so its cost must be met privately.

Vita says it offers help to patients of limited funds, but did not disclose precise details of how that might work. Twenty years after cannabis was legalised for medicinal use in California, 23 states and the capital Washington, DC have now followed suit.

According to Dahmer, attitudes are slowly changing. "There's still a lot of taboo," he told AFP. "I think it's definitely shifting in the right direction. Completely shifted -- I wouldn't say that much -- but there's definitely a positive momentum," he added.

Marijuana and its derivative products do not come under the control of the US Food and Drug Administration and conclusive scientific studies are still up for debate. "Many of (the studies) surround addictions or negative consequences but we're starting to see more studies related to the positive benefits," said Dahmer. According to a Harris Poll carried out last May, 81 per cent of Americans favour legalising marijuana for medical use, up from 74 per cent in 2011.