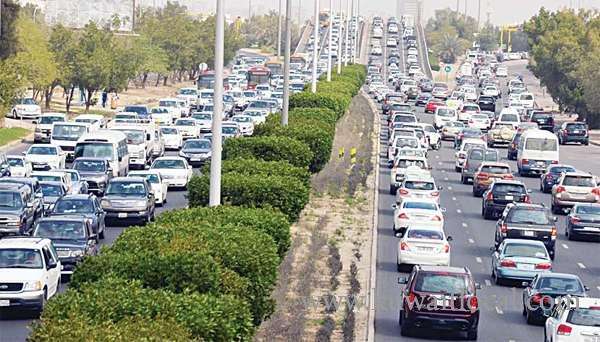 The complaints from road users, due to the daily traffic jams as a result of either maintenance is being carried out by the Ministry of Public Works (MPW) and the Public Authority Roads Transport (PART) from 6 pm to 6 am have increased recently because of the sensitivity of some roads which are prone to congestion, reports Al-Rai daily.

The congestion problems caused by highway maintenance usually occur during the maintenance of the Fahaheel Road and the Sixth Ring Road, but less so than the congestion on the Fourth Ring Road, which becomes almost paralyzed because of the limited number of lanes on this road, which is a vital artery. It connects three provinces, which do not allow for partial closure except on holidays and weekends, to prevent the suffocating traffic movement which was evident during the past few days.

A source familiar with the Ministry of Public Works said the biggest mistake made by the maintenance of the highways is lack of work intensity during past months before the start of the school season and return of holiday crowd, stressing that the concerned authorities should have seized the opportunity to carry out maintenance of the roads especially those that experience congestion.

He added those who set the schedule of maintenance schedules has missed on the estimation in choosing the appropriate days for the maintenance of the damaged links, and this misjudgment has resulted in the strangulation of highway users, while the PART officials are supposed to conduct a study and carry out inspection of each site separately, before performing the maintenance operation to help them choose the right timing.