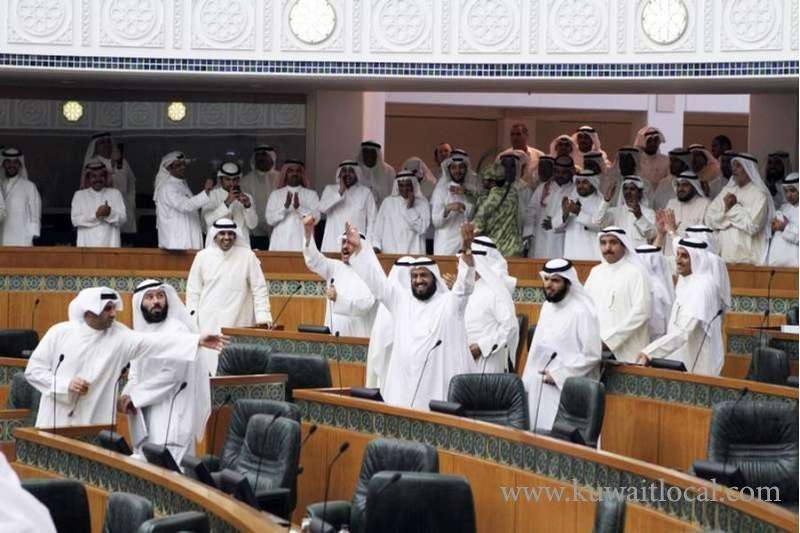 The request includes deliberations on repercussions of Abdally cell case, ways to prevent its recurrence, measures against the convicts and classification of Hezbollah as terrorist.

For the emergency session to push through; 33 signatures are required and then the request will be submitted to the government, followed by issuance of a decree calling for an emergency session.

Earlier, the Interior Ministry announced that based on the ruling of the Court of Cassation on Abdally cell case number 302/2016 and due to the disappearance of the convicts, it urged citizens and expatriates to fully cooperate with the securitymen and provide information about the convicts through emergency number 112 or the nearest police station.

The ministry pointed out Article 132 of the Penal Code (Law No. 16/1960) states that anyone who, by himself or through others, hides a person for whom an arrest warrant has been issued or assists the latter, shall be imprisoned for a period not exceeding two years and fined not exceeding KD 2,000 or one of these penalties.

Several MPs have expressed concerned over security lapses which led to the escape of convicts, while affirming confidence in the government’s ability to arrest the convicts. They also praised the decision of Kuwait to minimize diplomatic ties with Iran due to its involvement in this terrorist cell.

MP Mohammed Barak Al-Mutairi considers the escape an unprecedented security lapse as people under trial for involvement in the Iranian terrorist cell fled in the absence of effective control and follow-up mechanisms. He asked, “How can we feel safe in the midst of these lapses by the government … and a terrorist cell whose members are under trial and possess weapons and bombs while there is no effective control or monitoring mechanism?”

He asked the government to resign now, because the people of Kuwait no longer feel safe; otherwise, HH the Prime Minister Sheikh Jaber Mubarak Al-Hamad Al-Sabah will face grilling and non-cooperation motions.

MP Abdulwahab Al-Babtain asserted the escape of those he regards as traitors and conspirators against the homeland will not pass unchecked. He holds the interior minister and the entire ministry responsible, stressing the need for immediate investigation.

He also affirmed support for the request to hold an emergency parliamentary session to discuss this issue.

MP Khaled Mohammed Al-Otaibi blamed the Ministry of Interior for the disappearance of the convicts. He said, “The verdicts issued by our noble judges in the name of His Highness the Amir are enforceable. It is a disgrace that certain people are keen on harming State security.”

He believes the incident is a manifestation of security breaches and it affirms the presence of cells operating against the country. He asked the government to clarify the issue as the people of Kuwait know the truth.

He also unveiled his plan to submit questions to the interior minister about the failure to pursue the convicts and the foreign affairs minister on correspondences with other countries regarding the incident.

On the other hand, Shiite MP Adnan Sayed Abdel-Samad criticized the securitymen for blatantly crossing the red line when they mistreated the families of those involved in the case. He alleged the securitymen violated the sanctity of homes at night when they arrested relatives of the convicts, including women. “This is totally unacceptable so the interior minister and prime minister must be held liable,” he added.

An official source from the Ministry of Foreign Affairs confirmed that after the announcement of the Cassation Court’s ruling, the ministry took the necessary steps. He said the decision has been conveyed to the Iranian Embassy in Kuwait to reduce the number of diplomats in the embassy, close technical offices and suspend activities of joint committees between the two countries.

In a related development, MP Talal Al-Jalal praised the measures taken by Interior Minister Sheikh Khalid Al-Jarrah to arrest the convicts. He appealed to his fellow MPs to support the minister and stop threats, because whoever bets on the inability of the minister to arrest the cell members will lost. “I am confident that in the near future, the accused will be in the hands of ministry,” he added.

He also lauded the decision to reduce the number of diplomats in the Iranian Embassy, close technical offices and suspend activities of joint committees. He asserted these are commendable decisions especially since the court ruling proved Iran’s involvement in the formation and support of the terrorist cell as well as its interference in the affairs of other nations and outright disregard of its neighbors’ rights.

He urged the Iranian government to stop intervening in the affairs of Gulf countries, adding that “Kuwait resists those who want to undermine national unity. Kuwaitis are united and no one can divide us.”

He said Iran alone bears responsibility over negative developments in relations between the two countries. Iran should review its policy, focus on its internal affairs, improve the standard of living of its citizens, and stop supporting terrorism and extremism and interfering in the affairs of other countries, he concluded.

Furthermore, the parliamentary Foreign Affairs Committee discussed Thursday the climate agreement and provision of alternative energy between the governments of Kuwait and Paris.

In its press statement, the committee also asked the government to take all the necessary measures to protect national security. It expressed support for the State in maintaining security, prestige, sovereignty and territorial integrity.

The committee added the terrorist cell issue is a national security concern, so everyone must support the security authority instead of questioning or doubting it.