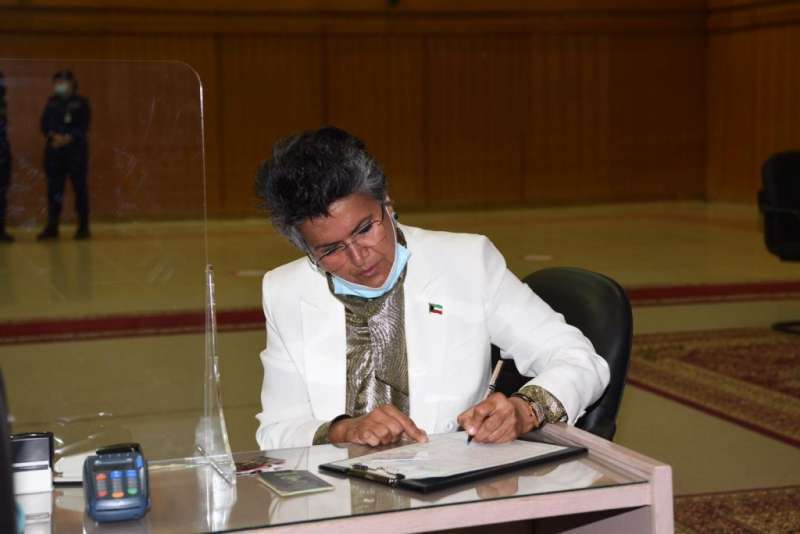 The Election Registration Center continued receiving the applications of citizens who intend to stand for the 2020 National Assembly election on Tuesday. A total of 45 citizens, including six women, registered on the second day of registration for candidates.

Many former MPs registered on Tuesday including Safa Al- Hashem, Khalid Al-Shatti, Saleh Ashour, Essa Al-Kandari and Naif Al-Merdas. Mona Abdulhusain Abdulreda, daughter of the late famous actor, was among the women who registered on Tuesday seeking a seat as representative of citizens residing in the Second Constituency.

In another development, MP Osama Al-Shaheen warned the government against responding to the request of the Kuwait Chamber of Commerce and Industry chairperson to issue a decree of necessity to enforce the bill submitted by the government to grant KD 3 billion to companies in the form of loans guaranteed by the State. He said this is a violation of both the Constitution and democratic process. He elaborated that it is a violation of the Constitution because the issuance of decrees of necessity is limited to urgent and emergent issues which are not applicable to the economic situation which has been going on for months. He added the issuance of such a decree violates the democratic process since the bill was not ratified by the previous Parliament. He disclosed some of the former MPs managed to prevent the passage of the bill which is being used as a Trojan horse through the inclusion of small and medium enterprises (SMEs) just to push for its approval, while the aim of the government and a number of former MPs was to provide full support to veteran businesspersons.

Alliance
He added the alliance between the businesspersons and some former MPs disrupted the ratification of many bills; stressing that he is against monopoly and harming public money, not the businesspersons. Meanwhile, the Kuwaiti Cabinet, during its weekly meeting at Seif Palace on Monday, congratulated His Highness the Amir and His Highness the Crown Prince as well as Kuwaiti people and the Muslim nation on occasion of the Prophet’s (PBUH) Birthday, due to fall on Thursday.

The Cabinet members reviewed the guidelines, set forth by His Highness the Amir Sheikh Nawaf Al-Ahmad Al- Jaber Al-Sabah in his address to the last session of the outgoing (the 15th) National Assembly last Tuesday. The Amiri speech reaffirmed commitment to the democratic course of the Kuwaiti people, and protection of the national unity and the fundamentals of the country’s foreign policy charted by His Highness the late Amir Sheikh Sabah Al-Ahmad Al-Jaber Al-Sabah, said Deputy Prime Minister, Minister of Interior and Minister of State for Cabinet Affairs Anas Khaled Al-Saleh following the meeting. The Cabinet members commended “the tremendous efforts” being made by the various State departments and civil society to combat the outbreak of the novel coronavirus (COVID-19) pandemic in the country. They also appreciated the cooperation given to the government by the National Assembly, reaffirming the government’s commitment to the democratic practices in the sun-up to the election of the 16th National Assembly, including protection of public freedoms, impartiality and transparency.