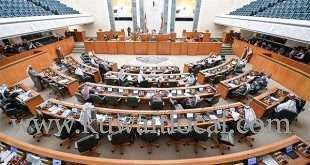 The National Assembly approved several incoming letters during its session Thursday as follows:

■ Request of MP Youssef Al-Fadala for the Public Utilities Committee to look into the demolition of Al-Sawaber Residential Complex despite the objection of the National Council for Culture, Arts and Letters (NCCAL) and State Property Administration.

■ Request of MP Osama Al-Shaheen for the Foreign Affairs Committee to study ways to intensify the fight against normalization of relations with the Zionist entity and efforts of all governmental bodies in this regard.

■ Request of MP Saleh Ashour for the Public Utilities Committee to submit a report on the government’s attitude towards the exorbitant rent increase in Al-Mubarakiya Market.

Meanwhile, the proposed amendment of Law No. 42/1964 on the framework of the legal profession before the courts was tabled for discussion but it was withdrawn from the agenda due to the request of the Legal and Legislative Affairs chairman who stressed the need for further revision.

On the other hand, the Assembly rejected the Public Prosecution’s request to lift the immunity of MPs Khaleel Abdullah Abul and Safaa Al-Hashem for minor electronic media misdemeanors.

The session was cut short as the MPs did not return to the hall after prayers, resulting in lack of quorum.

The meeting also touched on issues of mutual concern, including the latest developments in the regional and international arenas. After the meeting, a luncheon in honor of the visiting delegation was held at the Assembly’s banquet hall with a number of MPs in attendance