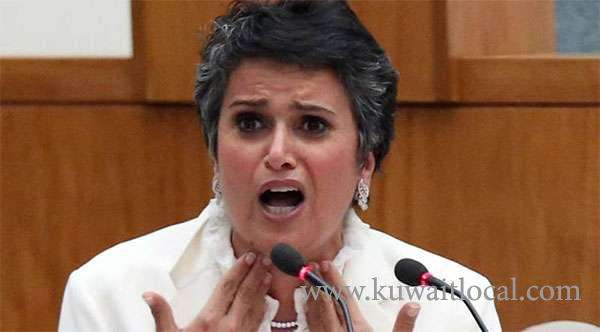 MP Safaa Al-Hashim continued her attacks on expatriates at Wednesday’s parliamentary session through the discussion of recommendations contained in 26 reports of the parliamentary committees concerning traffic congestion, environmental pollution, fish demise and others.

Al-Hashim jettisoned deliberation of the parliamentary committee reports on the protection of public funds as regards investigating the sale of companies, shell deal, KGL Company violations, and encroachment on state property. Instead, she focused her contributions on expatriates.

The lawmaker declared that all problems stated in the committee reports were due to the unusual population density. She noted traffic congestion in the country is caused by the abnormal population structure and large number of expatriates compared to citizens.

She continued to describe expatriates as opportunistic bacteria, saying the number of vehicles doubles the population. She reiterated that expatriates have been causing accidents that claim the lives of Kuwaiti children.

She lamented 571,000 driver’s licenses were issued to Kuwaitis compared to 657,000 for expatriates. “Why do the expatriates refuse to use air conditioned public buses and taxis,” she retorted.

She cautioned Kuwaitis on eating Al-Oumah, Al-Bayah and Al-Jam fish, because, according to her, they contain high concentration of arsenic poison since they are products of cesspool fishing.

She indicated the larger aspects of sea filths are due to dumping of cooking oil from apartments into the drainage system.

Meanwhile, MP Khalil Abul declared that reports of the committees were extremely significant to the state and society, including families. He stressed that government and the Parliament should devise a mechanism of dealing with them. “What are concerned state institutions doing about the prevalent cases of drug addiction”, he quipped.

He continued “the situation is dangerous if nobody confronts the scenario of government taking the parliament for granted on its absence at committee meetings. The case of the late former MP Falah Al-Sawagh is not the only issue of medical error surfacing, indicating many others patients have lost their life due to medical errors committed by expatriate doctors”.