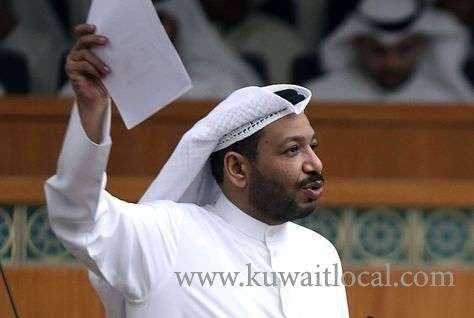 MP Faisal Al-Duwaisan has submitted a bill on protecting the family. In the explanatory note of the bill, Al-Duwaisan said his proposal stems from Article Nine of the Constitution stating, “The family is the cornerstone of society. It is founded on religion, morality and patriotism.

The law shall preserve the integrity of the family, strengthen ties between its members and protect it by supporting motherhood and childhood.” He pointed out the bill also stipulates protecting the privacy of women – the wife, sister or daughter – and the children especially since they are considered the weakest members of the family.

He asserted that women must be protected from the brutality of some of men who intimidate or coerce them into what they do not want to do or attack them without any justification, especially in severe cases of drunkenness and use of prohibited substances.

Article One of the bill defines ‘domestic violence’ as any assault on women and children resulting in bodily harm or pain or even threat to do so. Such acts shall be criminalized through the Penal Code or any other law in the following scenarios:

■ If the act is carried out within the family or among relatives, regardless of location – whether in the family home or in a public place.

■ If the act is carried out by someone who has authority or control over a woman or anyone related to her like the husband, father, brother or son. Article Two defines all forms of criminal assault including those on the body, soul or money.

Article Three stipulates that the Ministry of Social Affairs and Labor shall deal with domestic violence complaints. The ministry should achieve the social and legal objectives of the bill, particularly in terms of general guidance and studying cases to determine the causes and providing legal support if the complainant decides to resort to the court.

■ Provide the victim with temporary housing or shelter for not more than a year until the final ruling on the case or settlement.

Article Six states that the burden of proof is on the defendant.

Article Seven allows resorting to the judge in charge of urgent matters to adopt a resolution that ensures protection of the complainant and her children, if any, in the event of a serious threat, retaliation or repetition of the attack.

Article Eight stipulates penalties like imprisonment for a period not exceeding three months and KD 3,000 fine or any of these penalties which will be doubled in case of repetition.

The article clarifies that domestic violence is punishable if the act is carried out frequently or repeatedly, not once.

In another development, MP Auda Al-Ruweie stressed the need to prevent recurrence of fire incidents in the new university, indicating the repeated fire outbreaks will not stop unless those behind such incidents are held accountable.

He argued that it is acceptable if the fire outbreak happened only once, but the repeated incidents clearly indicate negligence or arson which means someone is benefitting from this.