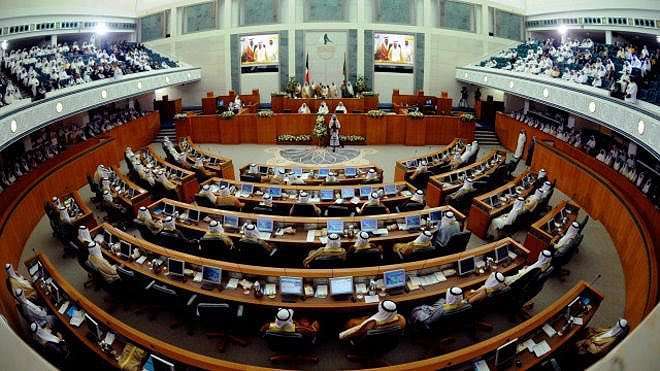 The Budgets and Final Accounts Committee in the National Assembly on Sunday met with representatives of the Foreign Affairs Ministry. However, Committee Rapporteur MP Badr Al-Dahoum disclosed the meeting was inconclusive because the officials who represented the ministry are not high ranking as needed.

He pointed out the committee expected interim Minister of Foreign Affairs Ahmed Nasser Al-Muhammad or Deputy Minister Khalid Al-Jarallah to represent the ministry, but they did not attend the meeting. He said the committee will not hold meetings under the interim government without the acting minister or undersecretary.

In another development, MP Osama Al-Shaheen criticized the call of some parties to allow liquor for personal consumption under the pretext that the liquor ban increased the number of drug addicts. He stressed that liquor is strictly prohibited as per the Islamic Sharia and Kuwaiti laws.

Citing reports of the World Health Organization (WHO), he said almost three million individuals die every year due to liquor; while 237,000 men and 46,000 women are suffering from diseases caused by liquor addiction and most of them live in America and Europe where liquor is allowed.

Meanwhile, MP Abdullah Al-Turaiji asked interim Minister of Justice Nawaf Al-Yasseen if the Public Prosecution has interrogated any of the incumbent and former MPs or senior officials for public funds embezzlement or corruption charges and if such lawsuits were used as tools for political blackmail. He requested for the names of those interrogated if any, case numbers of lawsuits filed against them, charges, and reasons behind the delayed submission of some lawsuits to the Criminal Court.

MP Badr Al-Humaidi forwarded queries to interim Minister of Public Works and State Minister for Municipal Affairs Rana Al-Fares about the procedures taken regarding the faults found in the bridge and flyover projects along King Fahd Road.

He asked if the ministry referred the concerned contractor for investigation, if penalties were imposed on the contractor, target completion date of road repair works, if the contractor caused the delay in completing these repair works, penalties imposed on him if the answer is yes, if the ministry caused the delay, and action taken against the concerned employees if the answer is in the affirmative.

MP Marzouq Al-Khalifa asked interim Minister of Finance Khalifa Hamada if fees for the use of vacant plots in residential areas have been collected as per Law Nos. 8/2008 and 50/1994. These laws stipulate that owners of plots measuring more than 5,000 square meters – one plot or many plots in different locations – must pay an annual fee of KD10 per square meter. He wants to know the measures taken against those who did not pay, total amount of collected fees, and if any of the owners have been exempted from paying.