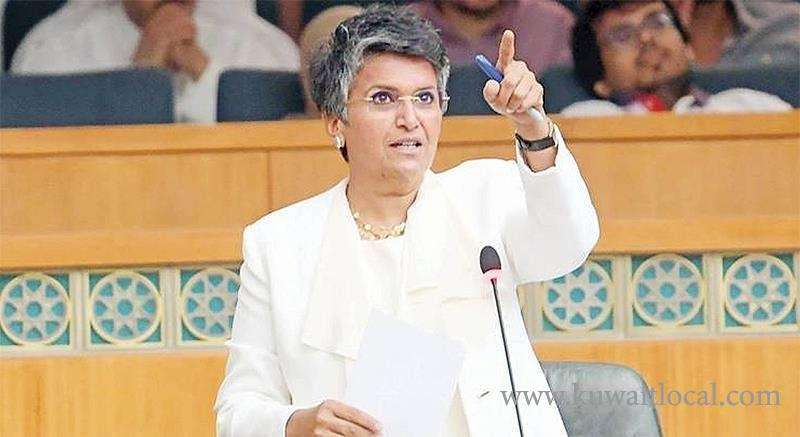 Commenting on MP Shuaib Al- Muwaizri’s speech in the previous session, His Highness the Prime Minister Sheikh Sabah Al-Khaled Al-Hamad Al-Sabah asserted that Al-Muwaizri, in his interposition, offended the Al- Sabah family. He highlighted that Al-Muwaizri mentioned the family 18 times, adding, “We have taken the oath to respect the Constitution as well as MPs’ freedom of speech. However, offending the family and accusing its members of corruption and injustice is not part of this freedom of speech”.

Sheikh Sabah Al-Khaled requested the removal of the offensive remarks from the minutes of that session. In response, MP Al-Muwaizri stressed that he was talking about reality. He said, “The Prime Minister is responsible for the general politics of the country, and all the prime ministers of Kuwait are members of the Al-Sabah family. Loyalty to the family does not prevent us from criticizing it and providing advice by pointing out the areas of shortcomings”.

Approved
The National Assembly approved the request of His Highness the Prime Minister to delete the offensive mentions from the session’s minutes. The discussions that followed included the parliamentary question submitted by MP Abdullah Al-Kandari to the Minister of Finance and State Minister of Economic Affairs Dr Mariam Al-Aqeel regarding the Kuwait Ports Fund established in partnership between Kuwait Ports Authority and Public Institution for Social Security. Al-Kandari said the actions of Public Institution for Social Security to retrieve the money were not enough.

Dr Al-Aqeel affirmed that Public Institution for Social Security is a shareholder in the fund and does not manage it, assuring that the MP’s observations have been taken into consideration and are being followed up. Al-Kandari went on to say the Russian manager of the fund is currently not in Kuwait, and the share of Public Institution for Social Security is much more than the KD 15 million mentioned in the documents with him, adding that he will follow up to know where the KD 220 million has gone. Deputy Prime Minister and State Minister for Cabinet Affairs Anas Al-Saleh thanked Al-Kandari and assured him that the matter is in the court, and the money will be returned to Kuwait.

Restructuring
Furthermore, MP Safa’a Al-Hashem called upon His Highness the Prime Minister Sheikh Sabah Al-Khalid Al-Hamad Al-Sabah to conduct a restructuring of the ministries because “they are infiltrated by a number of expatriate consultants”. She revealed that an expatriate consultant in Ministry of Finance is 78 years old, and his service in the ministry has cost the state KD 99,000.

They also discussed the parliamentary question submitted by MP Ahmed Al- Fadhl to the State Minister of Housing Affairs Dr Rana Al-Fares concerning the State Audit Bureau’s reports on the inefficiency of Al-Duwaila Contracting Company. He said the aforementioned company, despite the negative reports and delay in completion of projects, receives a large number of tenders of the ministry, insisting that the company owned by Mubarak Al-Duwaila is not capable of executing developmental projects.

In response, MP Mohammad Al-Dallal said he considers the aforementioned statement offensive to certain individuals, and asked for the removal of these mentions from the minutes of the session. During the session, discussions were held on the submitted letters including the letter submitted by the Head of parliament’s Committee for Financial and Economic Affairs MP Riyadh Al-Adsani regarding the repeated absence of a large number of members from the committee’s meetings, and the letter submitted by MP Abdul Kareem Al-Kandari with a request for allocating a session for the government’s presentation about the agreement on the joint zone between Kuwait and Saudi Arabia.

Praised
MP Ali Al-Daqbasi praised the agreement on the joint zone between the two countries, describing it as a good model for settling agreements between countries. He expressed gratitude to Ministry of Foreign Affairs for the efforts exerted in that regard. Al-Daqbasi urged the MPs not to approve the request submitted by the State Minister for Services Affairs Mubarak Al- Harees for allocating two hours to discuss important issues.

He said, “These issues are already known to all. We have talked a lot about the bad roads, housing problems, education etc. What we need is actions to be taken by the government instead of just talking which is a waste of time”. Al-Daqbasi invited the government to review the sessions’ minutes in which there are plenty of talks about these issues, indicating that he suspects this is part of a tactic adopted by the government.

While discussing the letter submitted by MP Riyadh Al-Adsani, he said the former MP Abdullah Al-Tamimi admitted in a TV interview that he received money from the then Prime Minister to distribute as donations and grants, and that he knows a number of MPs who also received money. Al-Adsani played a video clip of the interview during the session. In response, MP Saleh Al-Ashour said this matter has already been referred to the Public Prosecution, but Al-Adsani insisted that it is not true. Al-Adsani said he was referred to the Public Prosecution based on a report of the Investigations Department but the report included fake allegations that he had defamed the plaintiff by accusing him of bribery “which is not at all true”.

Lifting
The Public Prosecution had requested the lifting of Al-Adsani’s parliamentary immunity for investigations in the Lawsuit No. 528/2019, but only 11 out of 32 MPs voted in favor of lifting the immunity. Meanwhile, Minister of Foreign Affairs Sheikh Dr Ahmad Al-Nasser said the ministry welcomes the request of the National Assembly to discuss the agreement signed between Kuwait and Saudi Arabia.

Furthermore, MP Khalid Al-Otaibi stressed the need to amend the laws on freedoms, lamenting that the current laws negatively affect the reputation of Kuwait in this regard. He explained that many citizens were sent to court and then to prison or had escaped overseas because of a “tweet” which was nothing more than just their opinion. Recently, Dr Abdullah Al-Nafees was taken to court and banned from traveling only because he expressed his opinion. “A citizen is free to criticize any government as long as he is committed to the rules”, he added.

Al-Otaibi said he wondered why the embassies of Kuwait in various countries do not file any lawsuits against those who offend Kuwait and its leadership, but citizens are being subjected to such strict punishments. In addition, Minister of Social Affairs Dr Ghadeer Aseeri requested for postponement of the interpellation submitted against her by MP Dr Adel Al-Damkhi.

The National Assembly approved her request, and the National Assembly Speaker Marzouq Al-Ghanim declared that the grilling has been adjourned to the session on Jan 21. Dr Al-Damkhi said he had submitted the interpellation before the regional events occurred, due to which he approves the adjournment of the interpellation. Meanwhile, National Assembly Speaker Marzouq Ali Al-Ghanim announced Monday that a special session will be held next Thursday to discuss the government’s preparations to confront the accelerated regional events and to explain the divided zone agreement, as well as to discuss traffic law violations that often result in deaths.

Al-Ghanim said in a statement to reporters in the National Assembly that the special session will start with the discussion of the parliamentary request regarding traffic offenses, then explain the divided region agreement in an open session. He added that the session will then turn into a secret meeting to explain the government’s preparations to face the rapid regional events, indicating that this comes after coordination with the Prime Minister His Highness Sheikh Sabah Khaled Al-Hamad Al-Sabah and the Minister of Foreign Affairs Sheikh Dr Ahmad Nasser Al-Muhammad Al-Sabah. He indicated that after coordination with the parliament members, it was agreed that a special session will be held next Thursday, on the agenda of which the three topics will be discussed.