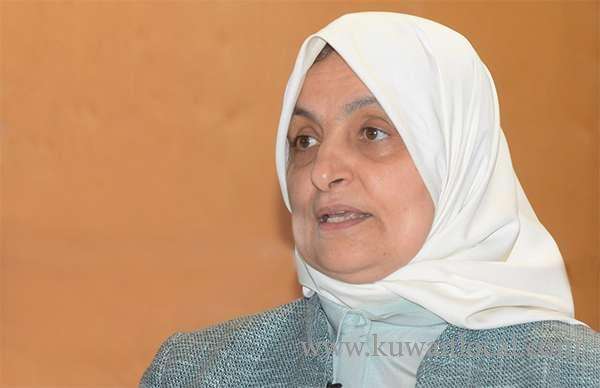 Minister of Social Affairs and Labor and State Minister for Economic Affairs Hind Al-Sabeeh affirmed that 38 judicial verdicts were issued against visa traders, and a total of 337 violating companies were referred to the Public Prosecution during the years 2015, 2016 and 2017.

She indicated that some verdicts ordered the companies to pay fines of more than KD 90,000, at a rate of KD 1,000 per violating laborer, after the Labor Law was amended to tighten the punishment and fines imposed on violators.

Minister Al-Sabeeh said this in response to questions on the sidelines of the inauguration of the new family welfare unit in Ishbiliya area on Tuesday in the presence of the Undersecretary of Ministry of Social Affairs and Labor Saad Al-Khiraz and the Assistant Undersecretary for Social Development Hassan Kazem.

She revealed about a new strategy to close the case files that are referred to the court so that there will be no loopholes for violators to exploit, adding that this step was aimed at regulating the labor market along with other decisions such as suspending transfers of residency among a number of sectors. On that note, the minister disclosed about the reduction of expatriate workers in the agricultural sector by 7,000 as a result of the application of the labor market regulative decisions. S

he affirmed that upcoming statistics will reveal a significant improvement in the labor market organization in other sectors such as fishing, industry, government contracts among others.

Meanwhile, in another development, Minister of Justice Faleh Al-Azb affirmed that coming out with ‘exclusive salaries’ as trump card at this point in time is an attempt by some people to incite chaos, reports Al-Shahed daily.

He added each lawmaker or public office holder has enjoyed the right to exclusive salaries since 1992 to avoid creating the “House of Lords”. In a chat with Al-Shahed Channel, the minister disclosed it is not possible to achieve full Kuwaitization of the judiciary, because the founders of Kuwaiti Constitution were from Egypt. He assured Kuwaiti graduates of Egyptian institutions will be accepted if they obtain ‘above average’ GPA.

He’s surprised some people have been insinuating that the Government and the National Assembly are always at loggerheads, reiterating both authorities are working to serve citizens by creating a stable environment. He stressed that government is not only under the watch of parliament, because the government also monitors the parliament in case of any legislative blunder.