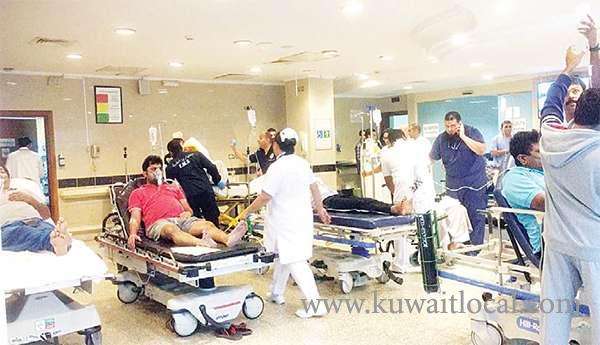 Ministry of Health assured Tuesday its readiness to face any extreme weather condition expected in the upcoming days. MoH is ready to implement the suggested emergency plan in all hospitals during the rainy season, Ministry officials said. As for Al-Sabah Hospital, an emergency plan has been activated during the past few days in accordance with the instructions of the Minister of Health, said Director Dr Abdulrahman Al-Anzi in a statement to KUNA.

The hospital received 3,746 in the past few days, and special teams were formed to deal with any urgent situation. Instractions were issued for all departments to follow updates given by both engineering and administration departments, Dr Al-Enzi added.

On his part, Dr Hani Al-Mutairi, Director of Al-Adan Hospital said that some 2,864 patients were received in eight days.  Non-urgent operations have been suspended till a further notice to make room for emergencies, and all medical, technical, administrative and nursing staff were on call, he noted. Dr Nadia Al-Jumaa, Director of Mubarak Al- Kabeer Hospital said that some 7,275 case were admitted and a special protocol on how to deal with respiratory diseases and asthma was activated.

All scheduled operations have been postponed except for cases requiring mediate surgical intervention to provide enough beds to receive emergency and asthma cases. As for Amiri Hospital, around 3,875 cases were registered last week, with additional 449 asthma patients, said hospital director Dr Ali Al-Alanda. “Some technical problems were dealt with immediately and Amiri Hospital is still ready to face emergencies and communicate directly with Ministry of Health officials”, Dr Al-Alanda added.

On his part, Director of Jahra Hospital Dr Ali Al- Mutairi assured the hospital continued to receive patients over the last few days. It received 2,690 cases on Thursday, 2,385 others on Friday, while 2,480 cases were recorded on Saturday. Several meetings were held, and inspection tours were organized to follow up with latest updated, in order to guarantee the safety of the patients and provide the best medical service for them, Dr. Al- Mutairi explained. Cases received at Farwaniya Hospital reached 7,581, said Deputy Director of the hospital Dr. Mohammad Al-Rashidi

Rainwater
The hospital’s administration dealt with heavy rain flowing nearby, and siphoning rainwater off the surrounding areas by special tools equipment’s. Response mechanisms have been placed across the country ahead of another anticipated spell of heavy rains on Wednesday, a government committee tasked with addressing the natural threat has said.

The recently-formed coordinative committee for rain emergencies was designed to ensure the safety of the lives of nationals and residents alike, Public Works Minister and State Minister for the Municipality Husam Al-Roumi said.

It combines representatives from all of Kuwait’s public bodies, which have expressed their commitment to working alongside one another in addressing the deficiencies witnessed during the recent downpour. So far, the ongoing meeting has also agreed to instate Col Jamal Foudari as the committee’s official spokesperson, who will be present at an operations room dedicated to the effects of the looming weather conditions.