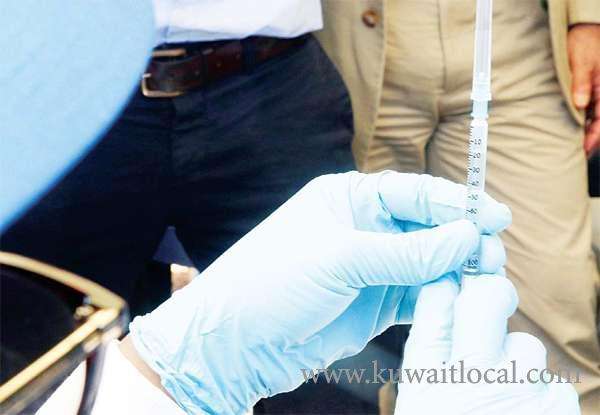 The campaign for winter vaccinations against respiratory diseases launched by the Ministry of Health a few days ago, aims to attract as many citizens and residents as possible, given the immunity to the body, so that it can resist various diseases, and overcome the infection and germ attack which many vaccinations help to prevent, as well as providing antibodies with the ability to fight infectious diseases such as chickenpox, whooping cough, diphtheria, hepatitis, and other diseases, reports Al-Qabas daily.

According to Health Ministry officials, flu vaccinations have increased from 50,000 doses to 160,000 this year, distributed over 40 vaccination sites in preventive centers and medical sectors in the defense and interior ministries, the National Guard, the Central Prison, the oil sector and others.

The Assistant Undersecretary for Public Health Affairs Dr Buthaina Al- Mudhaf told Al-Qabas that the campaign aims to reduce the incidence of diseases and reduce the mortality rate and complications resulting from infectious winter diseases, especially among the groups most vulnerable to infection and complications, noting that the campaign will begin early October and end December 31, 2019.

It also covers all health areas in the country, said the official, and pointed out that the campaign targets the most vulnerable groups of winter diseases, such as the elderly and those with chronic diseases and weak immunity and health workers.

The winter diseases he referred to are seasonal flu, as well as disease such as bacterial pneumonia is caused by Staphylococcus aureus, which affects millions of people around the world and can lead to death. Al-Mudhaf stressed that the vaccination is safe, as there are hundreds of millions around the world who have been vaccinated for years with little risk, pointing out that the side effects of vaccination are simple and disappear within days.

Al-Mudhaf stressed that the ministry has shown special attention to the importance of prevention and control of infectious diseases, especially respiratory diseases, which cause a huge burden on the health budgets of countries and cause large rates of complications and death, where nearly 500 thousand people die annually from the seasonal flu, and about 1.6 million as a result of pneumococcal pneumonia.