<![endif]-->
Advanced Search
MOE Has Issued A Circular On The Terms And Conditions To Apply For Supervisory Posts
Category: Kuwait 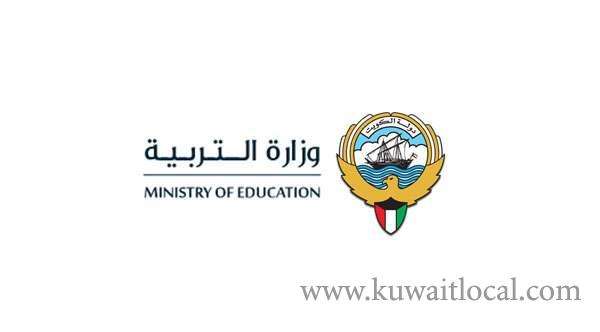 Ministry of Education has issued a circular on the terms and conditions to be met in order to apply for supervisory positions in the education sector, reports Al-Rai daily. The circular was sent to all educational zones, and it called on candidates from all stages and scientific disciplines to apply if they desire to do so, adding that the academic year 2018/2019 to Oct 1, 2021 will be included within the years of experience.

The candidates must have “excellent” in their last two performance evaluation reports during the last two academic years. The candidate’s nomination may not be considered in the event of a disciplinary sanction, except after the expiry of the specified period (according to the relevant ministerial decision).

The nominations of teachers transferred to educational zones must be followed up, and the nomination of non-Kuwaitis above the age of 55 years must be excluded. All nominations must be sent to the Department of Coordination and Follow-up in Public Education Sector no later than Sunday, April 7.

Meanwhile, Arab Open University (AOU) has been coordinating with Ministry of Education concerning the admission of its employees’ children in public schools starting from the next academic year 2019/2020, reports Al-Rai daily. AOU officials held a meeting with officials from the ministry’s Public Education Sector, during which the latter affirmed the approval of AOU’s request by the Legal Sector.

An educational source revealed that a decision in this regard will be issued and circulated to all educational zones. He indicated that a decision for providing admission to this category was issued in 2010 during the tenure of former minister of Education Dr Modhi Al-Hamoud but it was not activated during that period.