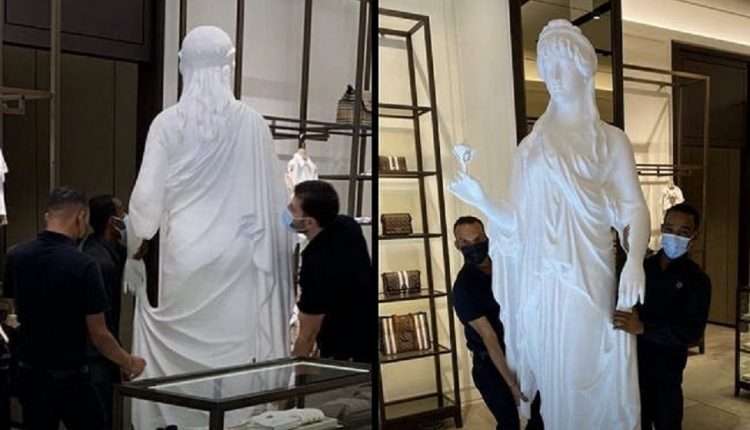 The recent removal of the Venus statue from a storefront in the 360 Mall still makes waves in the social media among Kuwaitis, some of whom turned the matter into a “black comedy,” considering the statue “an idol like the one worshiped by the infidels of the Quraish,” while others welcomed the move. At their head of the protest is former MP Muhammad Hayef, who described the placement of the statue in the commercial shop as “blind imitation, blindness of insight, with commercial greed that does not differentiate between halal and haram.”

While the Ministry of Commerce said its decision to remove the statue from the shop was in response to the complaint filed by a number of citizens, as some of them likened it to “the era of ignorance where they worshiped idols,” while tweeters made mockery of the decision, and some of them said, “There is no need to follow the Taliban, our Kuwaiti series are more interesting,” while others mocked “the authorities saying they are preoccupied with the statue of Venus, while there are more important issues that concern Kuwaitis.” It is noteworthy that this is not the first time that “idols” have stirred controversy in Kuwait. In 2018, three-dimensional models in the form of humans prepared by a shop had caused a sharp debate in the country, in which preachers, Sharia scholars, politicians and activists intervened, and the shop was forced to remove these ‘models’.

Muhammad Hayef, one of those who led the campaign on Twitter, tweeted at the time saying, “It is necessary to prevent the manufacture of these sculptures and statues, after they invaded the Arabian Peninsula, as leniency reached the point of establishing temples in some Gulf countries.” Kuwait has several museums, the most important of which is the National Museum, in addition to private museums, including the Dar al-Athar al-Islamiyya Museum, which contains rare Islamic artifacts. In the Museum of Modern Art in Kuwait, which opened in 2003, statues made by Kuwaiti artists are still trapped in closed halls, where a statue of the late Kuwaiti Amir Sheikh Abdullah Al-Salem lies in a closed hall at the head office of a local newspaper. The statue was made by Kuwaiti sculptor of world fame Sami Muhammad in 1972.