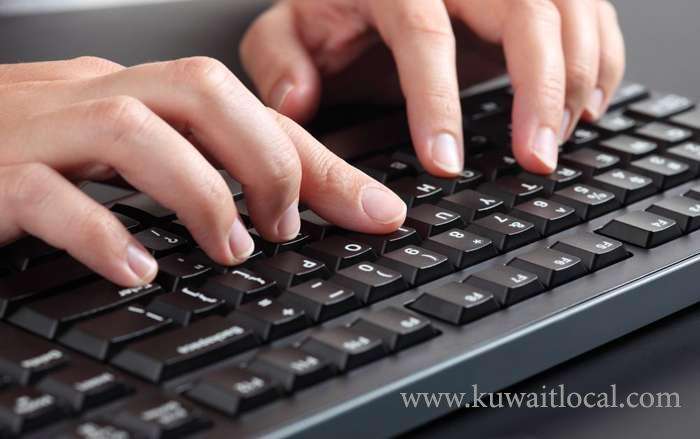 The Ministry of Justice is planning to appoint Kuwaiti typists after the Civil Service Commission (CSC) disclosed there are 581 Kuwaitis willing to fill these two positions, which means the ministry will no more need expatriates to do the job who until now have been typing the court verdicts, reports Al-Jarida daily.

While the Ministry of Justice is seriously considering the request of the CSC to appoint 581 Kuwaiti typists, in place of the expatriate typists who until now are typing the court judgments, legal circles have shown their concern in the event of the application of the ministry’s decision, which will result in the loss of the degree of litigation between the litigants who are restricted by 30 days in the civil, commercial, administrative and personal matters, such as appeal and cassation, 20 days in the initial penal sentences and 60 days in the criminal judgments.

The decision of the CSC and its approval to appoint 581 Kuwaiti typists and the non-renewal of the contract of foreign typists has provoked reactions among the legal circles between supporters of the idea and others, because of the seriousness of the work involved in this function and a number of foreign representative who are working for law firms in the evening, which will have to take into consideration the appointment of Kuwaitis who are willing to work in this position.

The legal circles revealed the urgency of applying the decision to appoint Kuwaiti typists only after making sure that they are ready to work, if they are not, they may affect the litigants, the dates of appeal and dealing with judicial decisions issued by the concerned departments in all courts. The legal circles have also called for creating a cadre of typists who can be absorbed in the system and who will be trustworthy and not leak the judgments before they are issued.

Attorney Ahmed Al-Hindal said the decision to appoint Kuwaiti typists in the courts to type the judicial verdicts and terminate the services of foreign workers is in line with the replacement policy, which the state is implementing in the state ministries consistent with the law. “However, the ministry must ensure that the sector responsible for the courts supervises the readiness of the workers and ensuring they are qualified which by nature of the work require seriousness, commitment and responsibility, because of its importance in preserving the secrets of the litigants and their private lives.”

He added: “It is therefore necessary to carefully check the quality of those who will fill these positions because non-compliance will give the right for the erred party resort to the judiciary to demand compensation for the delay in typing the judgments, and missing on the appeals date. Ahmad Al-Mutawa said that the decision of the Ministry of Justice is a prudent, because it will enhance the citizen’s confidence in working in such respectable professions and the employee will attain some kind of stability, especially as it may contribute mainly to solving the unemployment dilemma. Al-Mutawa added that “the citizen believes that he can innovate in every profession or job if his energy is invested well.

The job system carries the principle of reward and punishment. We have a good example in the private sector, so Kuwait can not intend to create another source of income, such as the industry unless the citizen senses his desire to serve the country in any job or profession that can put his mark on it. Lawyer Nasser Al-Hasban said typing is considered a secretarial and important work, especially in the Ministry of Justice departments because of the accuracy of verdicts that have been issued and the Kuwaiti employee is rarely good for this type of work, and since undesirable that he takes such a job.

He pointed out that the solution must be with someone who has experience in the field of typing which needs an experienced person unlike the current practice, especially in light of the suffering of litigants and lawyers from the disruption because of delays in typing.

A member of the Board of Directors of the Kuwaiti Lawyers Association Adnan Abul said the administrative system in the Ministry of Justice needs to be reviewed, and that there is strict control on the performance of employees of any nationality, the reality reveals the existence of administrative negligence, and control, although improved recently.

Abul said it requires a lot of effort to control the administrative process which has often been a source of complaint by the litigants so the order to appoint a Kuwaiti in the place of a foreign in the absence of review of this system cannot talk about improved work.