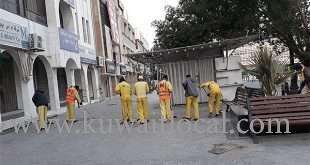 The Ministry of Awqaf and Islamic Affairs has formed a working group to resolve the problems related to contract number 100 in the tender 27- 2015/2016, for buildings and road cleaning company that handles the cleaning of mosques and the administration of mosques buildings in the Capital Governorate, the related salaries and residence of workers, reports Al-Jarida daily.

The sources told the daily the team is headed by the Assistant Undersecretary of the Mosques Sector Dawood Al-Assousi, and includes a legal adviser and a number of departmental directors and supervisors.

The team was formed a few days after a number of Bangladeshi workers demonstrated in front of their embassy, ransacked the building and attacked the consul and some representative of the company they work for because they had not received their salaries for two months.

Sources pointed out, the task of the team is to propose solutions in light of the law and provisions contained in the contract. The sources confirmed that the report of the Audit Bureau on the observations resulted from the examination and audit of the Ministry of Awqaf for the financial year 2017/2018, provided comments on the contracts of services, warehouses and transportation.

The sources also pointed out that there were shortcomings in the implementation of the said contract, valued at more than 2.402 million dinars and money paid unlawfully amounted to 198,982 dinars, noting that the ministry concluded the contract on Aug 17, 2016 with the company concerned for a period of 3 years.

The ministry said among these shortcomings, the ministry paid the contractor the wages of 539 workers without proof of payment of these salaries, which resulted in the payment of 139,783 dinars in salaries for workers that that do not actually exist who amounted to 197 workers in some months, in violation of Articles 3 and the fourth of the terms of the contract.

The sources pointed out that the number of labor required to be provided by the company is 539 workers residing in mosques with a monthly salary of 90 dinars for each of them, and 149 non-resident workers in the mosques with a salary of 90 dinars, but the management of mosques in August 2017 check of the actual labor found a shortage in numbers, which has been modified with the numbers of employment mentioned in the company’s invoice for the dues of August 2017.

Sources added that the shortage of labor continued until the date of examination in April 2018, while the ministry paid the value of salaries to workers who do not actually exist, the first disbursement was made in December 2016 and continued until the July 2017 payment, thus payments provided for workers that do not exist amounted more than the 139,000 dinars.
The sources pointed out that the report confirmed that the ministry did not apply the fine on the company worth 81,540 dinars, for not transferring the residence of workers for a period of 151 days in violation of the conditions, as well as not to apply the value of fines recorded on the company by the competent department, explaining that the value of what could be limited, 19,330 dinars, especially that the tender includes the calculation of the value of the fine as two dinars per day for each day per worker.