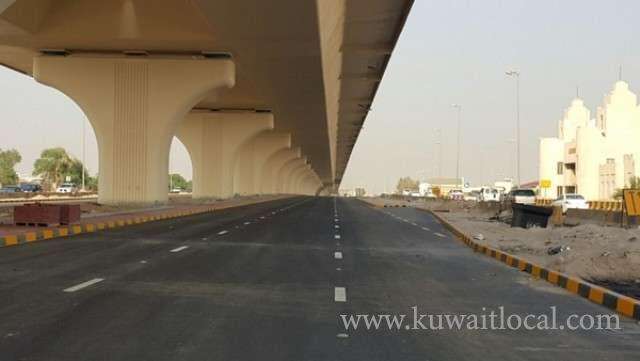 The Ministry of Public Works announced today another partial service road opening on the Jahra Road Development Project. The at-grade road opening starts from the Ali Al-Sabah Academy, and extends to the roundabout at the intersection of the Mohammad Bin Al-Qasim Street, in both directions.

Engineer Ahmad Al-Hassan, the Assistant Undersecretary for Road Engineering Sector at the Ministry of Public Works, commented: “The series of partial openings of both elevated and service roads witnessed recently on this project contributes to the on-going improvement of traffic patterns in the surrounding areas. With a major opening expected soon, a significant improvement will be felt by all road users.”

“The Ministry of Interior and the General Directorate of Traffic have been working closely with us, and inspections have been carried out to ensure that all safety standards and necessary opening procedures have been met. As always, we seek to ensure minimal disruption, and the opening will take place during low periods of traffic. We ask the public to be cautious when using the new roads as openings and changes have an effect on the flow of overall traffic patterns,” added Yasser Boudastour, Project Engineer at the Jahra Road Development Project.

This mega project involves the construction of 17.7 km of viaducts (7.3 km of mainline Jahra Road, 2.4 km of bridges on linked roads and 8.0 km of ramps), including a trough at the 2nd Ring Road intersection, 10 pedestrian bridges, and service roads. The Jahra Road project also includes major utilities relocation works.