<![endif]-->
Advanced Search
Message Of H.E. Sibi George, Ambassador Of India To Kuwait On The Occasion Of The 72nd Republic Day Of India
Category: India 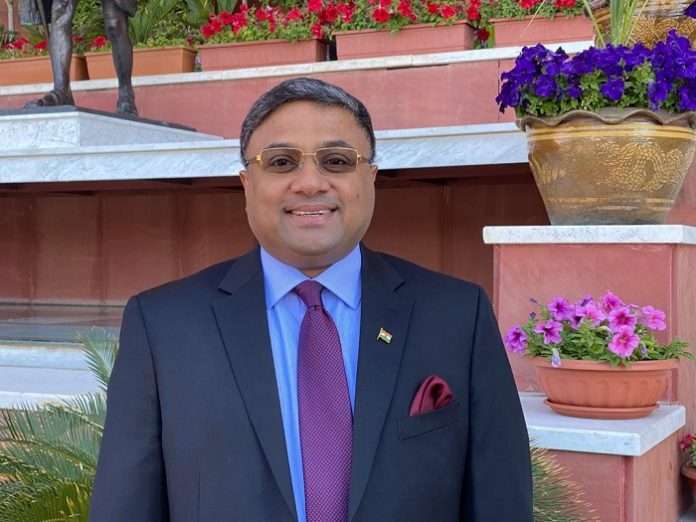 On the happy and joyous occasion of the 72nd Republic Day, I convey my warm greetings and best wishes to all my fellow Indians in the State of Kuwait. At the outset, I would like to express my sincere gratitude to the leadership, the Government and the people of the State of Kuwait, for their steadfast commitment and support to strengthening the already close and friendly relations between India and Kuwait. I also convey my deep appreciation to all the friends and well-wishers of India in Kuwait for their immense contributions in further enhancing the bilateral relations and transforming it into a vibrant ever growing partnership of mutual convergence.

The Gulf is a very important region for us. It is part of our extended neighborhood. With the State of Kuwait we have a historic relationship which can be traced back to several centuries. Geographic proximity, historical trade links, cultural affinities, people to people connect, and growing cooperation in key areas of mutual interest continue to strengthen and broaden our partnership. At the root of our friendly ties are civilizational connect and vibrant people-to-people linkages which have expanded and deepened with the passage of time. The Government of India is committed to further strengthen and expand this multifaceted relationship, which has over the years evolved as a long standing dynamic partnership.

Today we celebrate the Republic Day of India. It was on this day, the 25th day of January in 1950, India experienced one of its finest moments in history. A day when a young, independent nation became a Republic, which today stands as a beacon of hope to the entire world. On this day, the people of this nation gave unto themselves the most prized possession of all, a Constitution. The Constitution, which is based on our civilizational values and ethos, gifted to its future generations a ‘Sovereign, Socialist, Secular, Democratic, Republic’ which secures to all its citizens JUSTICE social, economic and political; LIBERTY of thought, expression, belief, faith and worship; EQUALITY of status and of opportunity; and to promote among them all; FRATERNITY assuring the dignity of the individual and the unity and integrity of the nation. Today, it is an eternal source of guidance and inspiration for the 1.3 billion people of India.

This year we celebrate the 72nd Republic Day; it is not just another year or a number in mere statistical terms, it is an important milestone in our continuous process of nation building and societal advancement. This year particularly is an important one as we face one of our toughest challenges ever, not only as a nation but as a human race due to the evolving COVID-19 pandemic.

I thank the leadership and the Government of the friendly State of Kuwait for taking care of the large Indian community in Kuwait during the COVID-19 pandemic. I also thank our dear doctors, nurses and other medical personnel in Kuwait who worked day in and day out to save lives. I thank the many community members and various associations who individually and in coordination with Indian Community Support Group (ICSG) took several steps to help our brothers and sisters in need during the most difficult days of the pandemic. The crisis is still not over. We should spread the message to people not to panic and to remain calm and confident.

At this critical hour, our nation’s true character of resilience has come to the fore in the face of adversity. We, Indians, should be proud of the fact that we not only managed to face the epidemic with great fortitude but we did this staying true to our Constitutional spirit of fraternity and our age old philosophy of Vasudhaiva Kutumbakam, where we always see the world as one big family. An ‘all country’ decisive and prompt approach led by Hon’ble Prime Minister of India Shri Narendra Modi has helped India in addressing the challenges posed by the pandemic. We have one of the lowest fatality rates and the highest recovery rates in the world; the daily fresh COVID-19 infections are firmly on a declining trend; yet we continue to remain vigilant until this battle is decisively won by us.

The global economy was hit particularly hard by the pandemic; the normal way of life and business is all but forgotten. Indian economy also faced pandemic related headwinds. However, timely intervention and support from the Government through special economic packages are coming to fruition with the economy now showing clear signs of revival. Hon’ble Prime Minister’s clarion call for ‘AatmaNirbhar Bharat’ (Self-Reliant India), which envisages a merger of the local with the global, has played the role of catalyst in this economic revival. Innovation and adaptability to the situation has been a key mantra in our holistic approach to this challenge.

Despite the pandemic, India retained its status as the primary destination for global capital with record breaking foreign direct investments into India during the year. The Government continued to remain committed to introduce major structural reforms, including through introduction of simpler tax systems, creation of a capable human resource base, development of a strong financial system and building of hard and soft infrastructure, to achieve the vision of a self-reliant India. Our business environment has seen a remarkable positive transformation with several positive measures introduced by the Government, which is reflected in India’s unprecedented improvement on the Global Ease of Doing Business rankings where we are now placed at 63. We are well poised to soon enter the top 50!

The vision of creating an environment of peace and security to ensure a better world for the entire humanity has been the guiding spirit of India’s foreign policy. India places an undeterred faith and belief in multilateral approach and has always taken the lead on issues of global concern such as fight against terrorism, climate change, energy security, food security, and the reform of multilateral institutions, including the UN Security Council.

India-Kuwait relations continued to enhance and strengthen during the year 2020. Despite the pandemic, institutional engagements continued to take place during the year. As we work towards a strategic partnership, our bilateral trade and investment ties continue to remain strong despite the headwinds from the cascading adverse ripple effect of the pandemic and its associated precautionary restrictions/lockdowns.  Embassy of India launched a dedicated series of events under the themes of ‘AatmaNirbhar Bharat’ and ‘States Facilitation’, and successfully organized a number of trade and investments promotion events in hybrid/virtual formats. The overwhelming response from the business communities of the two countries was heartening to see and it signalled the resolve of our businesses to conquer the challenges and return to normalcy.

This year, 2021, marks the 60th Anniversary of Establishment of Diplomatic Relations between India and Kuwait, the Embassy aims to celebrate this momentous milestone in a befitting manner with year-long commemorative events. We also look forward to celebrating the 75th anniversary of our Independence with the participation of all Indians and friends of India in Kuwait.

The Indian Community in Kuwait has played a commendable role in building the bilateral relations between the two countries. The people-to-people dimension forms the bedrock of this close and vibrant partnership. There is generous appreciation of the Indian Community in Kuwait and a recognition of their contribution towards the economic progress of the State of Kuwait. The Embassy is your ‘Home Away from Home’; we place the highest priority on the welfare and well-being of the Indian Community in Kuwait. For the Embassy, those who need help and support are not liabilities, they are not strangers; they are our brothers and sisters; they are not problems, they are our priorities. During the year, we have continuously endeavored to further improve the quality of our consular services and will continue to do so in the future.

Once again, on this joyous and proud occasion of the Republic Day of India, I wish every Indian national in Kuwait good health and happiness. I also take this opportunity to convey my best wishes to the leadership and to the friendly people of the State of Kuwait.