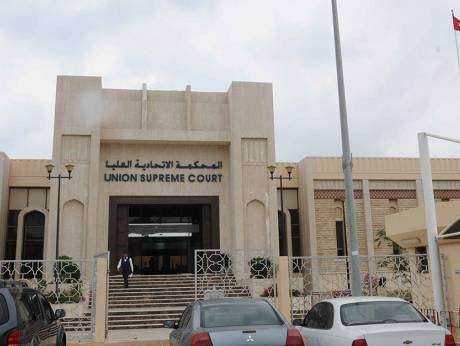 Group smuggled weapons into UAE  to kill people and overthrow the government, the Federal Supreme Court heard on Monday. A total of 40 suspected members — including 38 Emiratis — of the terrorist organisation are facing trial at a security court here.

On Monday, two witnesses revealed that the Al Manara suspects had smuggled weapons, ammunition and detonators into the country. The weapons were obtained in collaboration with Syria’s Al Nusra Front and Al Ansar Front in Balochistan province in Iran.

Their intention was to overthrow the government, kill people, attack shopping malls and hotels and declare a Daesh-style caliphate in the UAE, the witnesses told the court.

The state security division of the Federal Supreme Court examined the weapons confiscated from the suspects and heard testimonies of security officers. The hearing was adjourned to December 8 when two videos on the groups’ meeting in Ras Al Khaimah and Dubai will be shown.

The prosecutors have said the suspects are charged with setting up and running terrorist organisation Shabab Al Manara, ‘The Minaret’s Youths’, which upholds terrorist ideology with the intent to commit terrorist acts in the UAE and endangering the country’s security, peace and lives of its leaders and people.

Salem Saeed Kubaish, UAE’s Attorney-General, said that the suspects were also charged with planning to inflict damage on private and public properties to eventually seize power to set up a so-called caliphate state in line with their extremist ideology.
“To carry out their terrorist acts, the suspects procured firearms, ammunition and explosives using funds they raised for this purpose and communicated with foreign militants. These militants provided these suspects with funds and people to achieve their goals inside the country,” Kubaish said.

The State Security Prosecution presented five weapons, including Kalashnikov rifles, MP5 and M16 machineguns, explosives and detonators used in making bombs as well as a huge number of bullets and magazines.

The witnesses said police found these weapons and ammunition in a desert camp in the UAE. They said the group used Al Manara Mosque and Al Arqam School in Dubai to hold meetings and disseminate their terrorist ideology.

The evidence consisting of seven boxes of ammunition and weapons was carried by three people into the court. One of the defendants admitted to possessing one of the rifles but said that his father owned it, adding that it was a hunting rifle and was at his father’s home and not with him. A witness testimony revealed that the main defendant, K.K., had lost a son while fighting with Daesh militants in Iraq.

Investigations revealed that the organisation’s members were giving youth lectures that criticise and attack the government and the ruling system in the UAE, criticising the raising of the UAE flag and the standing for the national anthem as these acts are considered blasphemous.

Prosecutors said the suspects set up an organisational structure, including committees and cells with specific tasks. “A leader was appointed to oversee the terrorist organisation, issue orders, instructions, roles and duties for each committee. He was also assigned to set policies. His deputy was assigned to follow up implementation of these policies,” Kubaish said.

The witnesses  added these committees were assigned to recruit young Emiratis to instil extremist thought and train them in militant acts and manufacture of explosives at certain camping sites.

Prosecutors said the group  also disseminated audio and video material on the internet.

Convicted terrorists face capital punishment, life imprisonment and fines of up to Dh100 million, according to a federal law to combat terrorism endorsed last year.