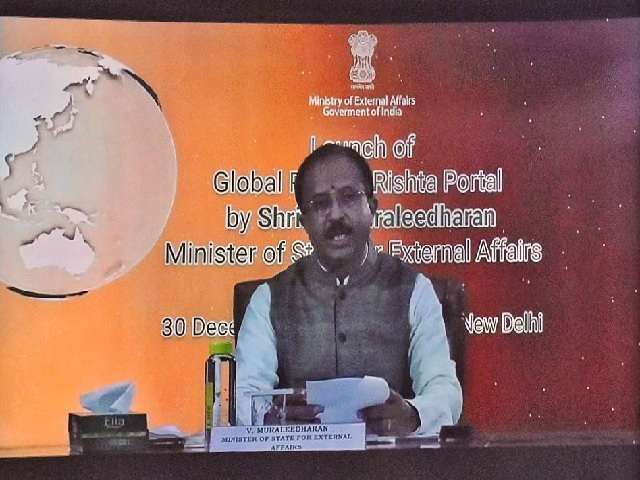 The Indian Ministry of External Affairs (MEA) on December 30, 2020, launched the Global Pravasi Rishta Portal and app in order to connect with nearly 3.12 crore Indians across the world.

While speaking at the launch of the Global Pravasi Rishta app and portal, V Muraleedharan, the Indian Minister of State for External Affairs stated that the app aims at creating a three-way communication between the Indian missions, ministry, and the Indian diaspora.

According to the Indian Minister of State for External Affairs, the government recognizes the significance of the Indian diaspora and has also been engaging them in various ways. One such step is the ‘Global Pravasi Rishta Portal’, through which the government aims at connecting with the Indian community overseas and not ceremonially but at every step.

The portal has been created to enable the registration of Indian diaspora members i.e. PIOs, NRIs, and the OCIs.
It will not just facilitate the government to connect with the Indian community overseas but will also facilitate OCIs, PIOs, and NRIs community by connecting them to various existing and new government schemes which will benefit them in various areas of interest.
The portal will also assist the Indian overseas during any crisis management and will also lend a helping hand.
It will enable communication on a real-time basis and will also have the ability to issue advisories and emergency alerts.
The portal will help the Indian diaspora to reach the consular services and officers in time of emergencies.
The portal will also contain useful information for the Indian diaspora such as information on passport, visa, and other consular services. It will also have the details about various events that are organized by the missions and the invites will be sent to diaspora members for greater participation.

The dynamic nature of the portal and the app will also allow the ministry to take useful opinions of the Indian diaspora on policy issues, conducting surveys, sharing e-newsletters, etc.

Why there was a need to create Global Pravasi Rishta Portal?

With the launch of the Global Pravasi Rishta Portal, there will be a three-way communication between the Indian missions, ministry, and the diaspora which will make engaging with the Indians overseas much easier.