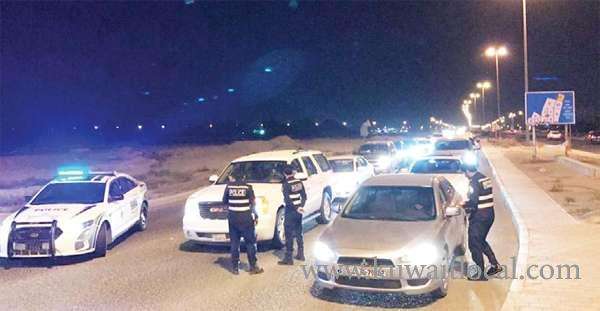 Officers from the Public Security Sector, under the guidance of Acting Assistant Undersecretary for Public Security Affairs at Ministry of Interior Major General Ibrahim Al-Tarrah, Monday and Tuesday organized a number of security campaigns in all governorates.

According to security sources, a total of 118 security checkpoints were set up in the governorates where 318 officers were present overall.

The officers arrested 145 individuals who are wanted by law for criminal cases or were reported as absconding, 244 violators of residency law and others without any identification documents, 10 marginal workers and hawkers, and 17 others.

They seized seven vehicles that are wanted by law and 57 others used for committing traffic violations. They registered 14 drug-related cases, four liquor-related cases, three theft cases and one case for illegal parking in spots allocated for the disabled.

They issued 652 traffic citations, dealt with 1,184 distress calls, provided 501 cases of assistance for Kuwaiti citizens and expatriates, and examined 444 traffic accidents. Public Relations and Security Media Department of Ministry of Interior affirmed that such security campaigns will continue in all areas of the country 24 hours a day.

It appealed to all Kuwaiti citizens and expatriates to cooperate with officers from Ministry of Interior for upholding security in the society. In Ahmadi Governorate, officers headed by Ahmadi Security Director Brigadier Abdullah Safa issued 190 traffic citations, seized 28 vehicles, and arrested 15 individuals without any identification documents, four wanted for cases, and six expatriates who were reported as absconding.