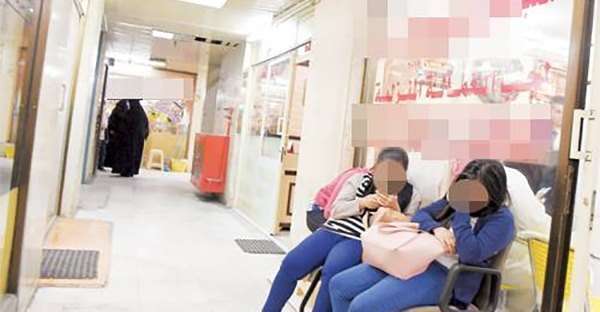 Domestic labor offices are among the establishments that are most affected by the COVID-19 pandemic, as they are suffering from heavy losses due to the negative repercussions of the pandemic, reports Al-Qabas daily. According to experts, the losses of some offices in this field have reached their full capital.

Most of them have closed, and their employees were laid off and their licenses canceled. Their crisis started last December, and since then their level of activity has been weak compared to normal times due to the cessation of some countries in sending their workers to Kuwait. With the pandemic, their situation worsened.

The owners of some offices said, Because of the poor condition that this sector is in, many of the license owners have submitted a request to cancel their licenses and retrieve the bank guarantee of KD 40,000. However, an increase in the trend of canceling licenses of domestic labor offices will create a black market. There are areas like Mahboula, Jleeb Al-Shuyoukh and Jahra that are full of domestic workers who are absconding and in violation of the law but are looking for work. Many among them used to work in homes temporarily and created problems by either stealing or escaping. Stopping the work of domestic labor offices could lead to these workers being employed, even if temporarily.

There are laws that must be adhered to by sponsors and owners of domestic labor offices. The owners of these offices often pay the price for the problems, as their profits are small compared to their problems and losses that may fall on the office.

Procedures
For example, one of the offices has about 70 visas for domestic workers. The one who pays the costs for government fees or travel tickets is the office. However, when COVID-19 happened, all procedures were stopped, and the office thus lost all these expenses.

This is especially since it is forbidden to take any amount, even a deposit from the worker’s sponsor except after receiving her and then paying the full amount. The domestic worker is also a responsibility of the office from the time of her arrival until the end of her two-year contract, as it has to monitor her conditions throughout her stay in the country.

They indicated that preventing the issuance of new visas has made the situation worse for the domestic labor offices, where there are recruitment requests accumulating. The domestic labor offices’ owners said, “Until now, the vision is vague for them, as there is no specific date as to opening the door of visas again. The resumption of the work of domestic labor offices is not mentioned in the fifth stage, although some of the Gulf countries have started issuing visas to bring in domestic workers”.

They are demanding to re-launch the issuance of visas based on certain conditions that coincide with the spread of the COVID-19 virus such as PCR analysis as well as other guarantees and procedures to confirm the worker is free of any disease. The owners called on the concerned authorities to allow them to re-employ the returned domestic workers, as this would help stabilize the sector, taking into account the fact that contracts are made with domestic labor offices in Kuwait and in the country of recruitment, and the embassies of these workers would witness the contracts, so that all procedures are done under the supervision and knowledge of the embassies of workers.

Crisis
They explained that their crisis began when the Philippines stopped sending its workers. In light of this, the concerned authorities intervened in the matter, and the offices started to receive domestic workers from the Philippines again but under strict conditions that were rejected.

The first of these conditions is for the domestic labor office to pay a financial guarantee in the banks of the Philippines in consideration of any dispute that occurs and to preserve the rights of the worker to take her dues from this guarantee.

Another condition was the requirement of a certain number of working hours, one day off per week, and a bank account for the worker. These conditions were considered by some as incapacitating and caused some to refrain from contracting with Filipino workers. According to office owners, any domestic worker who has a valid residency does not think of returning to her country during that period. If the two-year period ends and the time for her travel comes, those who want to leave her workplace resorts to another office so that she can be offered to work for another family.

However, the offices are prohibited from receiving or dealing with the returned domestic worker and her transfer to another customer. What is done in this matter is secret through an agreement between the customer and the office employee. It is not done officially and the delivery takes place outside the office.

The cost per hour of work on a parttime basis is KD 2 for the worker, provided that the number of working hours is not less than five hours per day. In line with the current conditions, some offices have created job opportunities for domestic workers, specifically those from Nepal and African countries, with a monthly salary of KD 130, and ability to reside at home, with paying commission of KD 150 to the office, and a three-day probation period.

These prices are not the charges of the offices of domestic labor or for new requests, but it is for returned labor transferred to another sponsor among clients, while some of them are not done through an office It is noteworthy that a law was recently passed to criminalize the sale of domestic workers through electronic applications, whereby those who commit that act will be punished with 15-year imprisonment.

According to sources from domestic labor offices, distance education has increased the demand for educated maids who are proficient in the English language. Families are using the aid to do many tasks, including education. Meanwhile, the guardian of three students, who works in a government job, said she was forced to choose the distance education system, and this prompted her to teach the domestic worker the distance learning programs and how to deal with it so that she can keep up with her children without any obstacles.

This is especially because the distance education system requires the presence of someone next to the student (first stage) in order to help him enter the classes at the specified times. On the other hand, the guardian of two students reported that she had to train her maid, who is of Asian nationality, to open a distance learning program and follow classes, and the latter agreed under the condition that her salary would be increased.