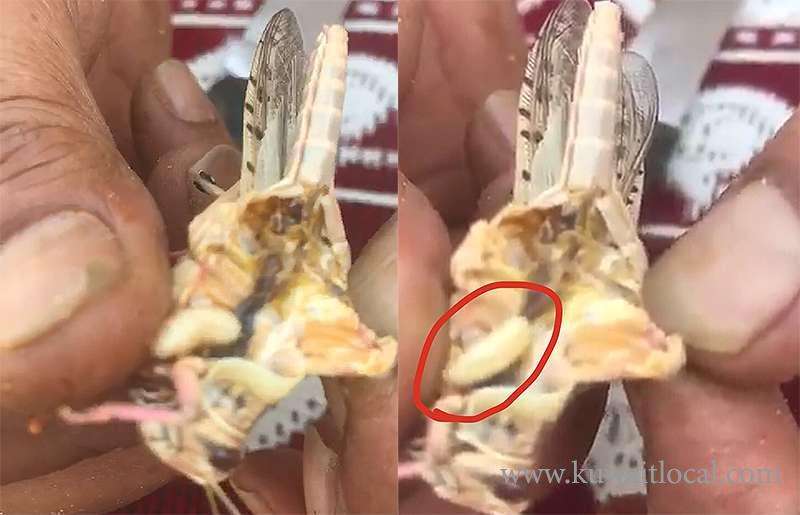 Kuwaitis generally pass their time eating locusts and enjoying their taste as a healthy snack which doesn’t cause any diseases to human body as it feeds on wild herbs and wild plants, and the old people use to wait for coming of locuts because it was a cheap food reports Al Rai

But this confidence finally turned into fear, panic and a warning not to eat it, after a video appeared showing a person offering to remove a worm from the stomach of Locust, warning that eating it would cause poisoning, which puzzled those waiting for the season to enjoy his taste.

As per Dr. Jinan Al-Harbi as researcher in Entomology confirmed that the video circulated regarding locust worms is true and realistic, indicating that locusts can be a carrier of many microorganism, including fungi, viruses and bacteria. She further stated what we see inside the locust’s stomach is the larva of one of the insects that may have entered by eating the locust for plants loaded with eggs of this insect and this is the only explanation for the existence of the worm.

Al-Harbi further stated that there is a type of parasite known as horse nematode (worm) that lives in the stomach of locusts and is harmful and causes its death, but its shape is completely different from what is found in the spread video, indicating that the larva in the insect’s abdomen may be a blue fly or one of insects such as a beetle and may be It is fatal to the locust because it feeds on its internal gut, but its secretions and excreta are harmful to humans, and it may cause intestinal infections and poisoning.

She also said that she is not sure that all locusts have this worm because we need to do a random examination of a group of locusts, but care is necessary and care must be taken and stop eating the locusts at the present time.

Locust carries a worm, symptoms appear only in its final stages when the larva wipes out its inner gut and becomes black, as it leads to impaired blood circulation and vital functions and is not edible, but if a person eats it while it is loaded with worms, it is normal to be poisoned and symptoms of vomiting is noticed.

As per Dr. Jinan Al-Harbi there are 20,000 species of locusts and varies according to the environment in which they live, considering that locusts are types of grasshoppers that have strong back legs that help him jump for long distances equivalent to 20 times his body length. She explained that the desert locusts are the most dangerous and the most influential on our region, as it is spread in Africa, Mauritania, Morocco and Sudan, and moves through the Red Sea to the Arabian Peninsula and from there to Iran, Iraq and Syria, and locusts reproduce at a tremendous speed, where the female can lay 95 to 158 eggs at a time One at least three times during its life cycle.

Al-Harbi reported that desert locusts feed on plants, so we find its spread is associated with rainy seasons, while its absence and its reproduction in dry seasons are weak.

The Desert Locust was considered one of the favorite foods of some peoples in Asia and the Arab countries, especially Saudi Arabia, Kuwait and Yemen, as it works to revitalize the body because it feeds on wild, aromatic and natural plants as it is one of the most effective tonic and stimulants and helps in treating rheumatism and back pain. It is also rich in protein, fats and organic materials such as manganese, calcium, iron, sodium, potassium and phosphorous.

Locusts should be avoided after spraying them with pesticides, as they are exposed to poisoning, as they destroy agricultural crops, and cause huge losses in the agricultural sector and the economy.