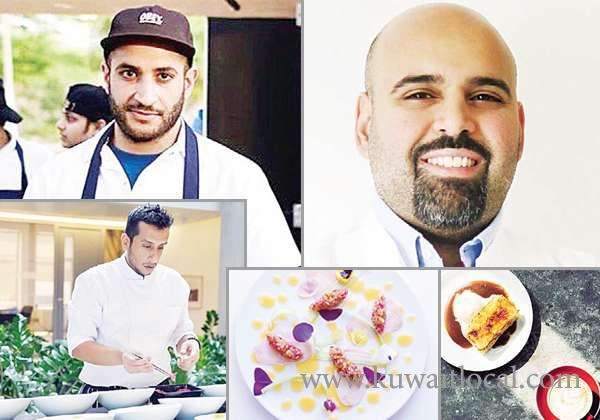 French cuisine is known throughout the world for its unique texture, outstanding flavor, and distinctive presentation, making it one of the most famous cultural exports of France. Like their other global peers, Kuwaiti chefs had made it their mission to excel in the art of French cuisine via adding a bit of local fl avor to the whole process.

Most people probably enjoy the famous French “duck breast” dish, but they would surely be astonished by its succulent Kuwaiti derivative, one of the creations of Chef Feras Al-Zaid, which adds orange to the mixture. Al-Zaid uses fresh ingredients from Kuwaiti farms to reinvent classic French dishes, like his “orange duck”.

Before indulging in the main course, Al-Zaid offers an appetizer — a soup inspired by the recipe of the great French Chef Guy Savoy — using truffl es from the Kuwaiti desert instead of mushrooms. For this creative young chef, French cuisine is not only the essence of gastronomy, but also a school of culture that teaches the restaurant industry how to structure a kitchen.

“The concept of setup and the brigade system helped me to organize who does what: the chef, the clerk, the party manager,” he said. In addition to executing the recipes, specific French cooking techniques are applied in the preparation of all the dishes, even non-French ones, he affirmed, adding that the techniques and approaches of other kitchens have for most originated from French cuisine.

The young creative chef is also founder of the “Community Table”, a platform that celebrates food and culture by hosting pop-up menus and workshops in top restaurants around Kuwait. Sharing Al-Zaid’s opinion, the chef and expert Ahmed Al-Bader believed that French cuisine was “the mother of all cuisines”. Since joining “Le Cordon Bleu” in 2004 and the French Culinary Institute in 2008, Al-Bader noted that he always referred to the basics of French cuisine in all of his projects, namely the technique of cutting vegetables using the “batonnet” and “julienne macedonia”.

In his experience in developing a new menu, Al-Bader said that “I made sure to brew the two cultures, French and Kuwaiti, without killing the original taste”. For example, the tuna dish with ginger and watermelon — a sort of a Kuwaiti-French cuisine invention — is one of the creations of Chef Al-Bader. The fish replaces white poultry and watermelon as base soup.

On his part, the only Kuwaiti representative at the world gastronomic event “GOUT DE France” — organized by Michelin-star chef Alain Ducas — talented chef Faisal Al- Nashmi insisted on the integration of French cooking techniques, either in his Asian based restaurant (Street Al-Makan) or even in the American brasserie (Table Otto).

He proudly serves many French dishes including the “aligots”, a famous French side dish that consists of potatoes cooked with care accompanied by “sous vide tenderloin” steak and grilled basil oil on top. Prestigious and inspiring, the Kuwaiti chefs stressed that learning French cuisine is a “must” to excel in the business and it would not be wrong to add a bit of a Kuwaiti flavor to the mix.