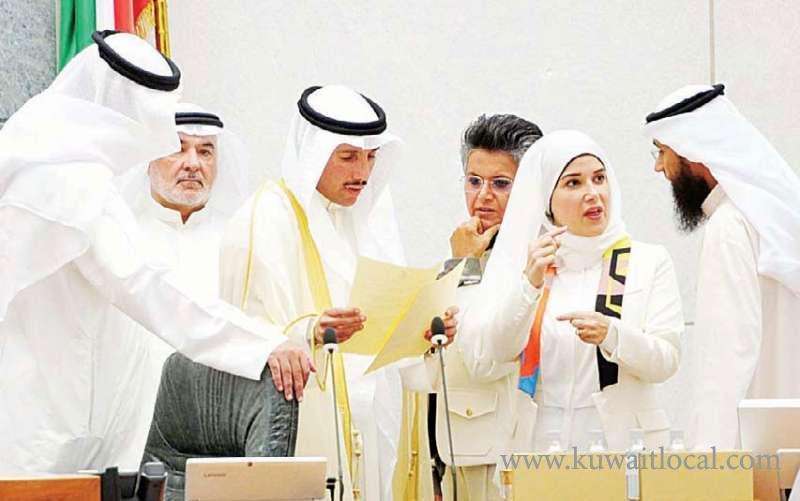 The National Assembly discussed the latest developments on the government’s security, military and civil defense preparations and protocols after looking into the incoming letters during its session Wednesday.

Official spokesman of the government Tariq Al-Mezrim revealed after discussions behind closed doors that the concerned institutions such as the National Guard and the Ministry of Defense presented the existing emergency protocols. He affirmed these institutions have taken into consideration the suggestions of the Assembly. On the other hand, MP Ali Al- Deqbasi affirmed that what has been presented to the Assembly is something we should be proud of, and that all efforts being exerted in this field deserves commendation.

Furthermore, in response to media queries on ongoing talks about the dissolution of the Assembly due to the infl ux of interpellation motions; Assembly Speaker Marzouq Al-Ghanim asserted that dissolution is in the hands of HH the Amir Sheikh Sabah Al-Ahmad Al-Jaber Al-Sabah. He pointed out such rumors have always been pushed forward and supported by individuals with hidden agendas since the beginning of this Assembly’s tenure. “But here we are, about to end our third year, and hopefully will complete our four-year term,” he stressed.

The speaker vehemently denied the rumor that more than one noconfidence motion will be submitted against the minister of finance, citing parliamentary regulations which state only one such motion should be submitted. He added the people will judge in case any MP will submit another motion and go against the laws and parliamentary regulations. Asked about the Assembly’s statement on boycotting the Peace and Prosperity Workshop; the speaker stressed that it represents the principles and legal, constitutional, historical and cultural obligations of the Kuwaiti public.

He added the Assembly is the representative of Arab conscience and that the government does not fall short in this regard as it has on numerous occasions raised this banner, especially its decisions and stances at the United Nations Security Council. He emphasized that all these efforts are in line with HH the Amir’s directive and vision for a better Arab world.

Moreover, the Assembly approved the 2017/2018 final accounts and 2019/2020 budgets of the following governmental bodies:

■ The National Fund for Small and Medium Enterprise Development

■ Kuwait News Agency On the sidelines of the parliamentary session, the Housing Affairs Committee approved the proposal to exempt Kuwaitis from paying infrastructure costs on their allocated plots. The proposal excludes the staple payment for the plot itself. This proposal was pushed forward with the support of the government in a bid to ease the financial burdens of citizens. In addition, the Legal and Legislative Affairs Committee rejected the proposal to prohibit Shari’a Studies graduates from practicing law. The committee also deliberated on the proposed amendment of law number 42/64 on regulating legal practices which was approved in its first reading recently.