Advanced Search
Late Amir Historical Visit To India In 2006 Was History In The Making
Category: India 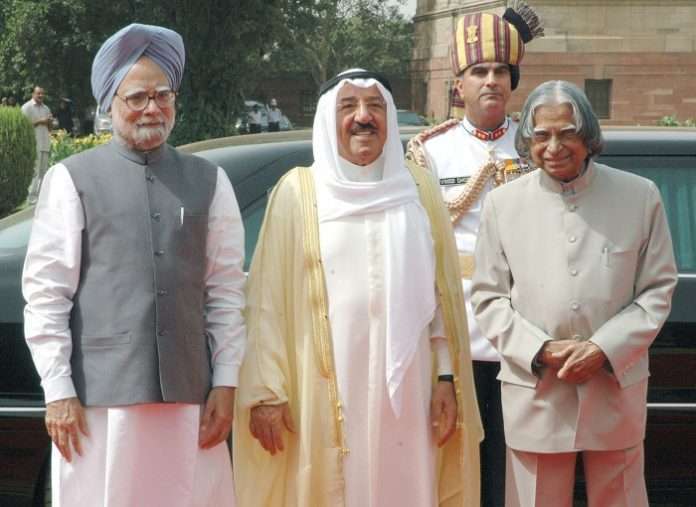 When recently-deceased Kuwait Amir set foot on the India’s soil on 14th June 2006, it was history in the making. This was H H Sheikh Sabah Al Ahmad Al Sabah’s first official visit to any country after he assumed power as the new Amir in January.  The gesture was well noted across the world of diplomacy as Kuwait endeavored to strengthen ties with India and taking the relationship to new heights.

The six-day visit of the Amir left a remarkable footprint in the Indo-Kuwait relations, which continues to add a new chapter of cooperation and mutual understanding on all international issues, a grand legacy that the Amir had left behind.

It was a deft diplomatic move as the Amir with his wide experience as the world’s longest-serving Foreign Minister knew well the significance to further strengthen strategic ties against the backdrop of more than 300 years of a close relationship that the two-nations enjoy.

The Amir of Kuwait arrived in New Delhi on a six-day state visit, on 14 June 2006, the first by a ruler of the Gulf country in more than 20 years to a rousing welcome. He was received at the airport by Minister of State for External Affairs late E. Ahamed, who had specially gone to Kuwait to invite him.

On his arrival, the Amir was received by the then President APJ Abdul Kalam and Prime Minister Dr. Manmohan Singh, and was accorded a grand ceremonial reception at the forecourt of the majestic President House by the three wings of the Indian Defence forces.

“We are ready to discuss all issues, which could serve the interests of both India and Kuwait, and we hope this visit will be a cornerstone in the tradition between our two countries, this tradition, which goes back in history.” the Amir set the tone in his brief address after the ceremonial reception

After the ceremonial reception, while the Amir was walking towards the VVIP enclosure to meet the dignitaries, he spotted some Indians especially late HS Vedi who was the Chairman of the Indian Citizen Committee who was waiting in the visitor gallery. Vedi had specially flown from Kuwait to welcome him  and the Amir stopped a while to meet with him. “ Hello my friend So nice to see you here:” As a seasoned diplomat, the Amir gave a strong message to the Indian leadership how much importance Kuwait attaches to the Indians staying in Kuwait.  Only a wizard in international diplomacy could have used these symbols to set the tone of his visit.

During his meeting, the Amir struck a direct chord with President APJ Abdul, who hosted a Presidential banquet in the evening where the entire cabinet of Indian government and the visiting delegation attended.

During his visit, India and Kuwait inked three pacts– the Double Taxation Avoidance Treaty (DTAT), Agreement on Drugs and Narcotics, and Agreement on Cooperation in Culture.

The Amir also charmed the Indian business community with his diplomacy when he addressed the three economic forums of India, the FICCI, Assochan and CII.  He not only made known to them that Kuwait would always welcome them to be their partner in progress but answered many of the questions with the erudition he was known.

The Late Amir’s visit to India according to most diplomatic commentators was a lampost in the Indo Kuwait relation as he took the 300-year-old relations between the two countries to the highest level, an achievement par excellence.  His wide variegated experience as Foreign minister was also in play as he met many of his old friends who were now occupying new ministries in the then government had once served as External Affairs Minister.

After his official engagements in New Delhi were over, the Amir visited Mumbai. It was a great symbolic gesture as the Indian economic capital was the hub of Indo Kuwait relation for centuries as Kuwait seafarers and traders would visit the city bringing dates, pearls and other items and would take Indian spices, timber, and other goods back home.

The Amir met the leading personalities of Indian business pundits during his two-day stay in Mumbai besides many celebrities from the Film industry also came to pay their respects.