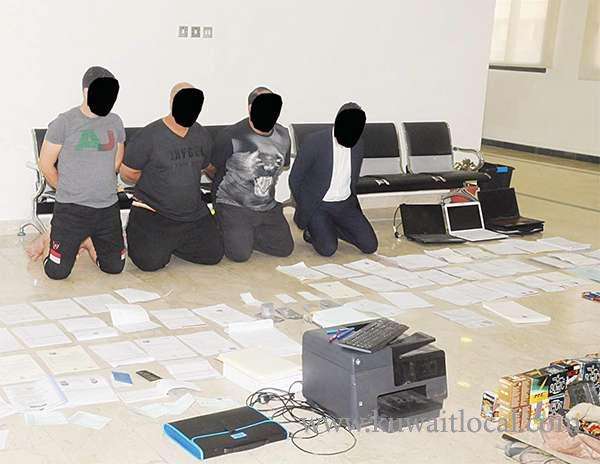 Officers from the Money Laundering Unit in the General Criminal Investigation Department at the Ministry of Interior arrested a gang of four — two Egyptians and two Kuwaitis — involved in the forgery of salary certificates for the clients of several banks and other financial institutions. In a press statement, the Public Relations and Security Media Department disclosed that the suspects forged salary certificates for those who have exceeded the loan limit — 40 percent of the salary — set by the Central Bank of Kuwait for the latter to acquire another loan.

The department pointed out this is by far the most complicated and sophisticated forgery case which came to the attention of the authority through a tip-off.

According to the informant, the gang forged salary certificates from the government sector and bank statements for several clients of banks and financial institutions who have exceeded the loan limit. Investigations following the tip-off led to the discovery that one of the arrested Egyptians was in charge of the accounts in a local bank. He allegedly connived with one of the citizens and others in forging the abovementioned documents.

Information gathered by the investigators also revealed that the gang received 10 percent of the loan granted to their clients as commission. Armed with an arrest warrant from the Public Prosecution, the officers arrested the gang after an undercover police made an arrangement with the suspects to provide him with the documents for three transactions.

The department revealed the person forging the documents is another Egyptian, who was arrested in his house and led the officers to his accomplice — a citizen. After searching his apartment, the officers found forged account files, a printer, and unlicensed firearm and ammunition. One of them confessed that he is unemployed and he owns two luxury cars which he bought using the money he earned through the forgery.