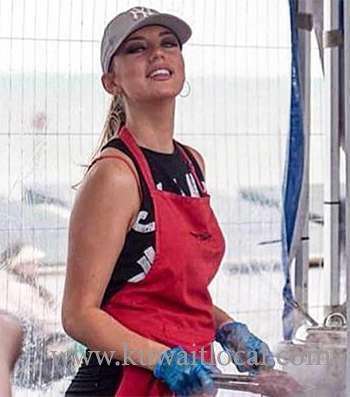 Rikki Lee Lemmon – who had never had a boyfriend before signing up to the ITV show – was swept off her feet by a young Kuwaiti whose dad is worth £400 million, reports Al-Rai daily quoting dailystar. com.uk

He wooed her with gifts including 10 pairs of designer shoes from Harrods and whisked her off for a weekend at the penthouse in the Ritz, London. The Kuwaiti now wants her to stop working in her mum’s burger van in Eastbourne to travel the world with him.

Thrilled Rikki Lee, 23, said: “He is the most amazing man I’ve ever met. I know he’s the one for me.” She appeared on Take Me Out in January and went on a date, but there was no spark.

She said: “I refused to be disheartened and decided to sign up to Tinder. I was scrolling through one evening and matched with a guy who I thought was really cute. “We started talking and all of a sudden he said he recognized me from Take Me Out. He said he’d seen me on the show and thought I was gorgeous and couldn’t believe I was still single, which was really sweet.”

The young man, who is in his twenties, has homes in Kuwait and the USA, was flying back to the Middle East next day and begged to take Rikki Lee out. Rikki Lee, who had no idea about his family’s vast wealth, agreed and he sent a taxi over to collect her. He left the next day but promised to fly back two weeks later to see Rikki Lee again.

This time the young man sent a Bentley for her and he whisked her away for a weekend in the penthouse suite at the Ritz, which costs more than £4,000 a night. It was at this point he opened up to Rikki Lee about his family’s ties to the oil world.

She said: “I was totally speechless. It’s not every day you meet someone worth millions. I thought it was hilarious – I work in a burger van!” Next day he took Rikki Lee to Harrods where he bought her 10 pairs of Christian Louboutins, which cost hundreds of pounds each.

He now wants Rikki Lee to quit her life in the UK to travel with him. Rikki Lee said: “It’s a big decision but I’ve never been happier. “A lot of people might think it’s the money, but I truly believe I’ve met my soul-mate. “I never truly believed that I’d find Mr Right on Take Me Out, but I guess in a round-about way I did.”