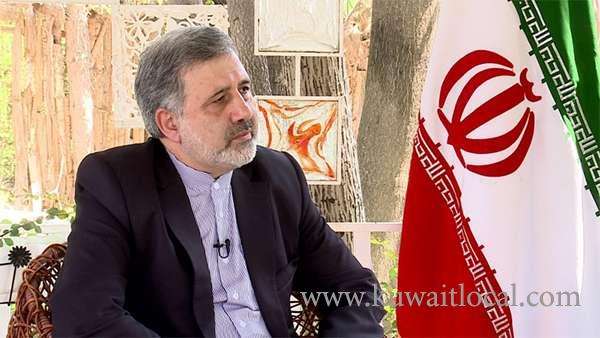 The Iranian Ambassador to Kuwait HE Dr Ali Reza Enayati affirmed the importance of the role of His Highness the Amir Sheikh Sabah Al-Ahmad Al-Jaber Al-Sabah in pushing forward the pace of the Gulf- Iranian dialogue, stressing that the message he carried from the Gulf Cooperation Council to the Iranian President Hassan Rouhani is “still alive and will be fruitful soon or later”, reports Al-Qabas daily.

He also affirmed the commitment of his country and its adherence to dialogue, denying any Iranian threats to close the Strait of Hormuz for oil tankers. The ambassador highlighted his country’s desire to accept His Highness the Amir Sheikh Sabah Al-Ahmad’s invitation to participate in the third summit of the Asian Cooperation Dialogue, which is expected to be hosted by his country on Oct 13-15.

He explained, “The Iranian-Kuwaiti relations are rooted in history, geography, origins, race, ethnicity, blood, culture and social relations. Whenever we go back in history, we find that this deep connection has been prevalent in the relations between the two countries.

These relations are not limited to protocol, political and commercial matters but are much deeper as if they represent a huge tree with very deep roots”. Ambassador Enayati went on to explain that the cooperation between Iran and Kuwait in the field of combating terrorism and money laundering happens through the exchange of visions as a general framework because there is no agreement or committee between the two countries concerning this matter but they share general visions and views.

They are seeking to strengthen cooperation in this field either through bilateral meetings or in regional forums. He insisted that Iran is committed to anti-money laundering tools, and that the Islamic Shura Council and the Council of Constitutional Experts are currently studying Iran’s inclusion in the International Convention against Money-Laundering.

Regarding terrorism, Ambassador Enayati stressed that Iran has been suffering from terrorism, and his country has been active in combating terrorism even though it is not a member of any international alliances. He indicated that Iran, under the request of the Iraqi and Syrian governments, went into this field by sending advisers and making strenuous efforts to defeat terrorism, which is considered as an adversary for all due to which the fight against it requires collective action.