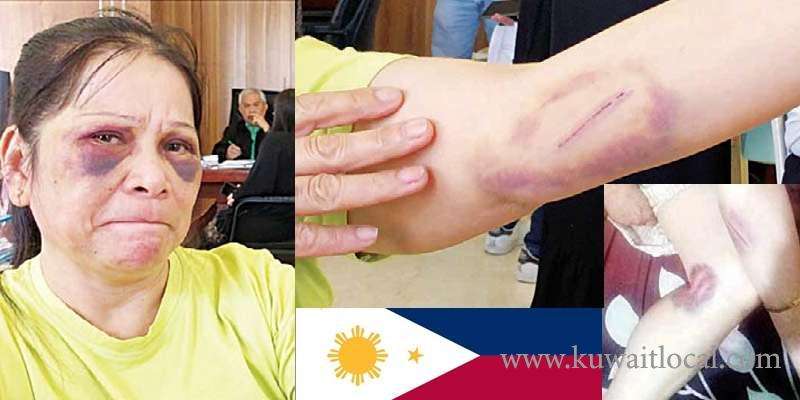 KUWAIT CITY, June 24: Filipina household service worker, Jessielyn Española whose case went viral recently on social media site Facebook is seeking justice for the severe beating that she allegedly suffered in the hands of her employer’s son. Española, 49, married with three kids, a native of M’lang, Cotabato in Southern Philippines has been working for the same Kuwaiti household for 11 years and did not expect that she will suffer severe beating after she was accused by her employer’s son of stealing the necklace of her employer’s daughter on June 14. “I told him, I did not steal it. Why would I do that? I’ve been with you for 11 years and I never took anything from you.

Even if I see some fils on the floor, I returned them to you but he won’t listen to me. He boxed my eyes. He kicked me and pulled my hair. He got the shisha of baba and hit me with the steel. I was crying due to excruciating pain,” recounted Española to the Arab Times. She begged her employer’s son to stop but everything fell on deaf ears. 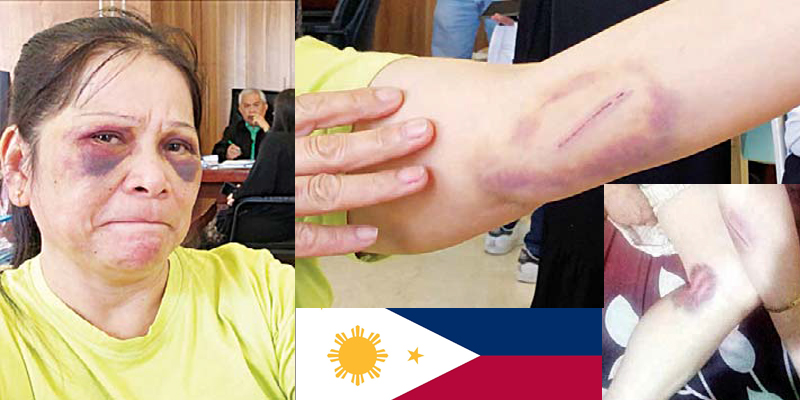 Advisory To Filippinos In Kuwait

“I was whining in pain and told him, please stop, I didn’t get your sister’s necklace. He won’t believe me and continued hitting me. He said, after I finished my cigarette, I will kill you if you won’t tell the truth and send you back to the Philippines. So I ran to the bathroom and hid there,” sobbed Española as it was hard for her to accept that the child that she looked after for 11 years beat her up. Española’s sponsors were not in the country at that time when the incident happened. With black eyes, bruises and hematoma on her arms and legs, she asked her employer’s daughter to take her to the hospital but she did not and bought her some medicine instead.

“They bought me some cream to apply on my bruises. On that night, I scribbled a note on the paper asking for help and passed it on to one of my friends who posted it on Facebook and thanked God, people shared it till it reached the Philippine Embassy. Thank you to the Kuwait police and the embassy,” she recounted.

Filipino Kidnapped From Airport, Raped And Dropped Her Back To Airport

With the help of Kuwaiti authorities and the Philippine Embassy with Assistance to Nationals Unit Officer Jo Sto Domingo at the helm, Española was extracted from her employer’s house and taken to the Saad Abdallah police station on June 17.

A case was already filed against her employer’s son. The Philippine Embassy has delegated a Kuwaiti lawyer to handle Española’s case. Though Española is safe now at the POLO-OWWA shelter, what worries her is the schooling of her two children as she awaits the resolution of her case. “To President Duterte, please help me. So my two kids will finish school, one in college and one in high school. I am jobless now. Please help me,” she appealed. Despite the signing of the Memorandum of Agreement on the Deployment and Protection of Domestic Workers between Kuwait and the Philippines in May 2018, cases of maltreatment of Filipino domestic workers continue to be reported.