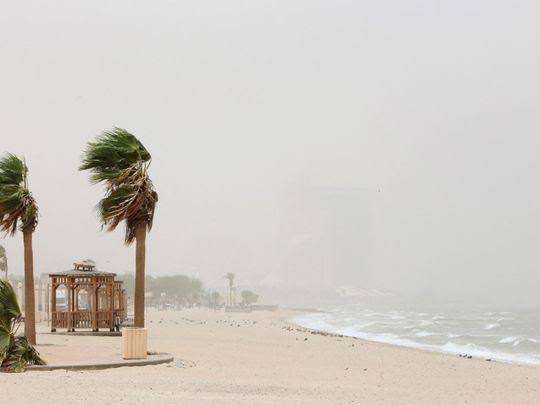 In his forecast for the Kuwait Meteorological Department, Abdulaziz Al-Qarawi predicted that the country would continue to rain until the end of Wednesday, with hail and strong winds, and that weather conditions would improve on Thursday. According to Kuwait News Agency (KUNA), rains of varying intensities affected the country on Tuesday, ranging from light to medium in general and heavy in some areas, especially in the central and southern regions. As a result of this situation, hail and active winds with speeds that exceed 50 kilometers per hour are expected to persist through the last hours of Wednesday, causing sea waves to reach more than 6 feet, fog to form, and low horizontal visibility in some areas.

During Monday evening, he explained that the country was affected by a rainy condition due to the Sudan seasonal depression, which extended into the country. There was warm and moist air, in conjunction with a cold depression in the upper atmosphere, which led to the proliferation of low and medium clouds interspersed with some thunderstorms due to the presence of a cold depression.

A weather forecast can be found on the Meteorological Department's website and its official mobile application, especially during weather fluctuations, so people can stay informed about the latest weather developments and see weather warnings if they are issued. On Tuesday, Kuwait's Ministry of Interior urged citizens and residents to be cautious due to heavy rains and low visibility.
The ministry urged everyone not to hesitate to call (112) in case of emergency, reassuring everyone that all security bodies are on high alert to respond immediately. In response to ongoing rains, Kuwait's drainage system is capable of handling water accumulations, according to a Public Works Ministry spokesman. It has been raining continuously since early this morning, according to Ahmad Al-Saleh, the official spokesperson of the Ministry of Public Works and the Public Authority for Roads and Land Roads.

Some water puddles are being dealt with by ministry and authority emergency teams in the inner districts and on the highways, he said, reaffirming that drainage networks can absorb the accumulations despite the continuing downpour. The teams will remain alert to forecast sea high tides that may disrupt water flow into the sea. Through social media, the hotline 150, and the ministry's WhatsApp account, the ministry, civil defense, and other relevant authorities coordinate to respond promptly to any situation. The emergency teams are stationed in all regions to monitor hazardous water accumulations and provide assistance if needed, according to Al-Saleh.