<![endif]-->
Advanced Search
Kuwait To Mark World Cancer Day Under 'I Am And I Will' Theme
Category: Health 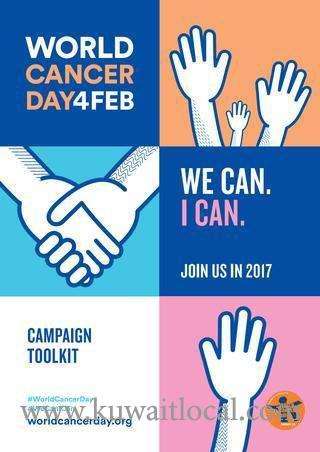 Although there has been noticeable progress in finding cures for some serious diseases, cancer remains one of the most deadly one. In Kuwait, proportion of cancer cases among nationals reached 183 out of 100,000 Kuwaitis, compared to 161 among women, according to official statistics (2015). The figures show that the total number of cancer patients, males and females, reach to 2,680 in 2015. Among expatriates, there were 114 among 100,000 foreign residents of the country. World Cancer Day will be marked globally on 4 February so as to spread awareness and acknowledge the problems with the disease.

The disease is a case where human tissues swell abnormally due to dysfunction in genes, affecting various organs. Cancerous cells expand to neighboring ones causing tumors, largely curable if detected at an early stage. Therefore, it is quite necessary to guide people about early medical examination.

On the occasion, Deputy Chairman of the Cancer Awareness National (CAN) campaign Dr. Khaled Al-Saleh told KUNA that Kuwait, since the 2010 international conference against chronic diseases, has exerted noticeable efforts to fight such illnesses, forming the National Committee for Fighting non-Communicable Diseases. The committee has trained scores of students on early detection of the disease, in addition to training hundreds of doctors and nurses. Furthermore, there had been tangible work of various forms, such as the launch of the Ministry of Health program for examining the breast, the colon, and the rectum, in addition to holding many awareness seminars.

Meanwhile, Dr. Khuloud Al-Ali, Director General of Kuwait Cancer Control Center (KCCC), said cancer comes in second in relation to causes of death, after cardiac illnesses. Cancer claimed, in 2015, 8.8 million lives worldwide. By average, one out of six patients die and 70 percent of cancer-related fatalities have been recorded in low and medium income nations. The 2015 statistical survey in Kuwait showed that most of the cases were in their 50s; four percent of them were aged under 18 and 36 percent were aged 60 and above.

Dr. Khaled Al-Khaldi, tumors specialist at the same center, reaffirmed that cancer is treatable if detected early. Proportions of cancer cases in Kuwait did not noticeably rise over the past years due to improvement in treatment methods. This year's World Cancer Day, themed "I am and I will," aims at cutting the number of fatalities among patients suffering from non-communicable disease by 25 percent by 2025 and educating communities about best means to fight and avert cancer.