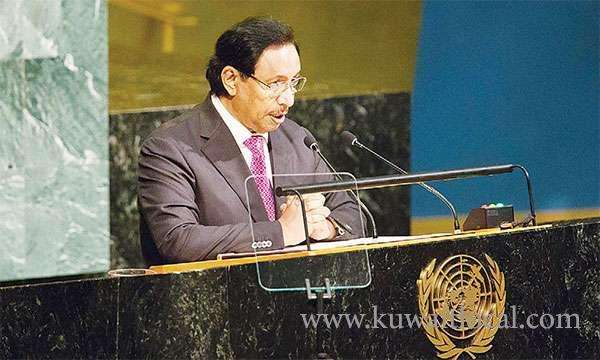 Kuwait has said it would cooperate with Iraq to fulfill commitments towards Kuwait as listed in UN Security Council resolutions, noting it would host an international donor meeting to rebuild Iraqi areas liberated from terrorists. Kuwait is showing flexibility towards payments of billions of US dollars in compensations of damage caused by the 1990-91 Iraqi invasion and occupation of Kuwait.

Iraq is compelled to pay the compensations in line with relevant UNSC resolutions. Kuwait’s move “aims at helping Iraq regain its regional and international role,” representative of His Highness the Amir Sheikh Sabah Al-Ahmad Al-Jaber Al-Sabah, His Highness the Prime Minister Sheikh Jaber Mubarak Al-Hamad Al-Sabah said in a speech before the UN General Assembly session in New York.

He noted that Kuwait, in cooperation with Iraq and the international community, would be hosting an international donor conference next year to rebuild areas liberated from so-called Islamic State (IS). His Highness the Amir had called Iraqi Prime Minister Haidar Al-Abadi following the liberation of Mosul to congratulate him on the victory, and offered to host the international conference.

His Highness the Prime Minister, in his UN speech, congratulated the Iraqi government and people for their victory against IS and the liberation of many areas that used to be under the terrorist group’s control. “We are looking forward that these victories continue until the liberation of all areas, to contribute to boosting national conciliation among all segments of the Iraqi people,” he said.

This conciliation, said His Highness the Prime Minister, should preserve unity, independence and sovereignty of Iraq in order to pave way for reconstruction and return of internally displaced persons to their homes. The Iraqi armed forces, backed by the international coalition fighting IS, have been liberating many areas occupied by the terror group.

His Highness the Prime Minister said terrorist and extremist groups were “exploiting Islamic teachings … to achieve illegitimate objectives. They want to create chaos, incite sedition, and provoke hatred and extremism.”

Seated Kuwait
Kuwait said Wednesday it would be committed to strengthening UN Security Council’s role in preserving world peace and security, when the country assumes non-permanent UNSC membership next January. His Highness the Prime Minister said Kuwait would work on enhancing UNSC role in conflict prevention, mediations, peaceful resolution of crises and promotion of transparency within the Council. His Highness Sheikh Jaber Al- Mubarak said the State of Kuwait, whose last UNSC membership was in 1978-79, also sought to promote contribution of small countries in the different UN agencies. His Highness the Prime Minister said Kuwait, which would take over the UNSC rotating presidency next February, would work hard to activate international response to refugees, immigrants and displaced. His Highness the Prime Minister, who thanked all countries that voted for Kuwait’s 2018-19 UNSC membership, hoped that “peace and security prevails in the whole world.”

Confidence measures
Kuwait called upon Iran to adopt “serious confidence-building measures” towards building relations based on mutual respect and non-interference in internal affairs. His Highness the Prime Minister representing His Highness the Amir Sheikh Sabah Al-Ahmad Al-Jaber Al- Sabah at the UN General Assembly in New York, said relations with Iran should also be based on rejection of all practices undermining regional security and stability.

Those relations, which should be based international law and principles of UN Charter, should ultimately contribute to peace and security for all people in the region, said His Highness the Prime Minister. Kuwait’s First Deputy Prime Minister and Foreign Minister Sheikh Sabah Khaled Al-Hamad Al-Sabah visited Iran last January and delivered a letter from His Highness the Amir to President Hassan Rouhani, dealing with dialogue between the Islamic Republic and the Gulf Cooperation Council (GCC). Kuwait is acting on the GCC behalf in holding a dialogue with Iran with the objective of having relations based on mutual respect and good neighborliness.