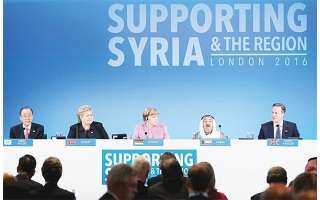 His Highness the Amir Sheikh Sabah Al-Ahmad Al- Jaber Al-Sabah on Thursday announced Kuwaiti contribution worth $300 million for aiding Syrian people for a three-year period hoping such an initiative would help in alleviating their hardships. His Highness the Amir, addressing London’s “Supporting Syria and the Region” Conference that kicked off, earlier on Thursday, stated, “I am pleased to announce today the State of Kuwait contribution,

at the official and grassroot levels, of $300 million (to be disbursed) in three years in support of Syria, hoping that we will be able to realise the aspired objectives and helping our brothers in soothing their pains.” His Highness the Amir stressed that the political solution in Syria is the only option for putting an end to the deterioration of the country’s humanitarian disaster.

“We emphasize that the humanitarian disaster can be solved only through reaching a political solution aiming to halt the bloodshed and restore stability in our world,” His Highness the Amir said in a speech during London’s “Supporting Syria and the Region” Conference that kicked off, earlier Thursday. “We are pinning our hope on the UN Security Council Resolution 2254 which could combat this disaster and address it. We hope that a political solution could be reached to end the suffering of the Syrian people and help the world get rid of its destructive repercussions,”

His Highness the Amir said that “we ought to consider new philosophy to provide support for refugees and internally displaced peoples through adopting programs and plans offering education for children to maintain their rights and help them face burdens of life.” Education can enable children to plan for their future and protect them from adopting any destructive ideas, the Amir, said, stressing the necessary of approving programs for offering better health services so as to immunize them against epidemics and diseases.

Providing special programs are also needed to secure opportunities for children to help them avoid acts which may pose a grave threat to their future, and repercussions of unemployment, His Highness the Amir pointed out. His Highness the Amir said the big numbers of internally displaced people that “we have recently noticed reflect the severity of suffering and aggravation, by double, of the crisis and its repercussions, facing those brothers. The London’s “Supporting Syria and the Region” Conference was held after Kuwait had hosted three conferences at this level over the last three years, during which participating countries made pledges totaling about $7.3 billion,” the Amir added.

The Amir stated that the sums “contributed to meeting required needs and helped in alleviating suffering of the Syrian people who are facing a major humanitarian disaster, in our contemporary world, with the crisis entering its sixth year.” The disaster has not affected “only our region, but also other continents, including Europe which received large numbers of refugees seeking security and a dignified life,” the Amir added, indicating that some terrorist organizations emerged from the hotbeds of tension, moved to some European countries so as to launch some criminal acts.

His Highness the Amir expressed his gratitude to British Prime Minister David Cameron, the UK government and people for the warm reception and excellent preparations for the conference. His Highness the Amir also thanked German Chancellor Angela Merkel and Norwegian Prime Minister Erna Solberg for their participation in the chairmanship of this significant event and for their efforts which express that they realize suffering of the Syrian people. Norway’s Prime Minister Erna Solberg pledged 10 million Norwegian Kronas ($1.17 billion) over the next four years for the unfortunate Syrians — primarily for education and child protection. “Schools and hospitals must not be attacked, starvation must not be used as a weapon,” Soldberg told London’s donors conference, Thursday.

She added “We must support the victims, the women and girls who will have to rebuild their country when the conflict is over.” She also stated that the situation for civilians and Syria’s neighboring countries will get worse if the international community “fails to take decisive action now.” Earlier today, Solberg, who is also co-chairing Syrian aid conference argued that it is in Europe’s self interest to do more to help the Syrians. Speaking to BBC Radio 4’s, she said “If we don’t invest more in the neighborhood and neighboring countries we will have an even bigger problem than we have today.

” She added “We have to have a long-term plan for helping those in the area. We can only hope that people see this is both an important humanitarian task but also a bit of self interest for a lot of European countries.” Solberg urged rich Gulf countries to do more to help. “I hope they all contribute much better than they did last year,” she said. “Kuwait has done a great job. They are the country that has given the most money per capita. But we need more countries in the region to dig in.” Norway has been among the largest humanitarian contributors to people affected by the Syrian conflict, since its break-out five years ago.

Donor nations pledged on Thursday to give billions of dollars in aid to Syrians as world leaders gathered for a conference to tackle the world’s worst humanitarian crisis, with Turkey reporting a new exodus of tens of thousands fleeing air strikes. With Syria’s five-year-old civil war raging and another attempt at peace negotiations called off in Geneva after just a few days, the London conference aims to address the needs of some 6 million people displaced within Syria and more than 4 million refugees in other countries.

Underlining the desperate situation on the ground in Syria, Turkish Prime Minister Ahmet Davutoglu told the meeting that tens of thousands of Syrians were on the move towards his country to escape aerial bombardments on the city of Aleppo. “Sixty to seventy thousand people in the camps in north Aleppo are moving towards Turkey. My mind is not now in London, but on our border — how to relocate these new people coming from Syria?” he said. “Three hundred thousand people living in Aleppo are ready to move towards Turkey.”

Turkey is already hosting more than 2.5 million Syrian refugees. Jordan and Lebanon are the other countries bearing the brunt of the Syrian refugee exodus. “Looking into the eyes of my people, and seeing the hardship and distress they carry, I must tell you we have reached our limit,” said Jordan’s King Abdullah. Several speakers also made the point that while the situation of refugees was bad, that of Syrians trapped inside the country enduring bombardments, sieges and, in some places, starvation was far worse.

“With people reduced to eating grass and leaves and killing stray animals in order to survive on a day-to-day basis, that is something that should tear at the conscience of all civilized people and we all have a responsibility to respond to it,” US Secretary of State John Kerry told the conference. United Nations agencies are appealing for $7.73 billion to cope with the Syrian emergency this year, and countries in the